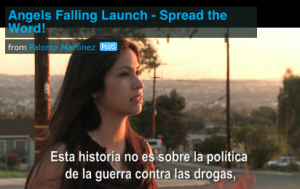 LatinaLista — A thesis film by University of Southern California graduate film student Paloma Martinez begins with a disturbing statistic: “It is estimated that 30,000 minors have been recruited by (Mexican) drug gangs…”

These children are recruited to complete a variety of dangerous and deadly tasks — smuggle drugs, act as assassins, extort money, etc. — and threatened with death if they don’t obey. Martinez wanted to highlight this disgusting practice and so she wrote and is directing a fictional film based on these true facts titled “Angels Falling.”

The story is about Rafa, a thirteen-year-old who is forced into working for a Mexican cartel gang as an assassin. He must pay off the debt owed to the cartel by his absent father in order to prevent the cartel from murdering his mother and little sister.

Since all USC thesis films are self-funded, Martinez has started a fundraising site for her film on Kickstarter. Her goal is $20,000. In an email to Latina Lista Martinez writes: It is estimated there are 7.003 billion people on Earth. We just need 2000 people to donate $10 each to make this film! It would be amazing if you could help spread the word or support us. Be a part of the 2000!

Previous Post If Supreme Court strikes down Affordable Care Act, it could pose more problems for GOP among Latino and disenfranchised voters
Next PostHawaii’s Colombians celebrated their traditional Carnaval at Magic Island

If Supreme Court strikes down Affordable Care Act, it could pose more problems for GOP among Latino and disenfranchised voters
Comment
Hawaii’s Colombians celebrated their traditional Carnaval at Magic Island