2012 election proves the start of seeing Latino candidates as mainstream

LatinaLista — Those who were paying attention to the media last week, in the aftermath of the election celebration by the Democrats and the forehead-slapping by the Republicans, noticed that the next generation of Latinos, both Republicans and Democrats, aren’t waiting around anymore to be invited to the proverbial political table. 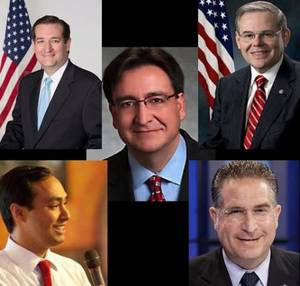 For starters, Latino candidates made historic gains at the state legislature level, as compiled by the National Association of Latino Elected and Appointed Officials (NALEO) Educational Fund:

In the Del. State Legislature, youth development program executive Ernesto Lopez (R) was successful in his race against business owner Andrew Staton (D) in the sixth district. Lopez will be the second Latino to serve in the Del. state legislature; and

Latino candidates also, achieved notable gains at the state lower house level this year, with the total number of Latinos rising from 190 to 206. States with increased numbers of Latino legislators or notable milestones in the state lower chamber include:

The Ariz. State House of Representatives, which will increase from eight to 13 Latinos;

Latino legislators elected to serve in the Calif. State Assembly will reach 19, an increase of four; and
Maine elected their first Latino to the state house of representatives. Former flight attendant and community leader Lisa Villa (D) won her contest for the 98th district against business owner Roxanna Hagerman (R).

Then one lone Latino, from a very distinguished, if not a little tarnished political family dynasty, decided to make his move into politics. George P. Bush filed paperwork with the Texas Ethics Commission to run for office.

It’s a sign that leadership in the GOP won’t soon be business as usual — and that’s a good thing as long as George P. doesn’t follow the paths of his peers,Ted Cruz and Marco Rubio, by trying to be a Tea Party darling to get votes. The time has arrived that Latino candidates are mainstream enough to be elected on their own merits without appealing to extremists in either party for support.

If Cruz and Rubio stray from their base in the next Congressional session and align themselves more with traditional Latino values then that will be the biggest sign that Latino candidates feel confident enough in their own abilities as politicians.

Laying out the bare facts of how Obama won the election
Comment
Video: Latina filmmaker focuses lens on evolution of superheroines