LatinaLista — If there was an overriding lesson from last year’s GOP primary campaigns, it was that conservative views on abortion and planned parenthood haven’t changed from the beginning of Christianity. In fact, this issue, more than any other, is the original “zero tolerance” stand where intolerance, yet again, trumps common sense. 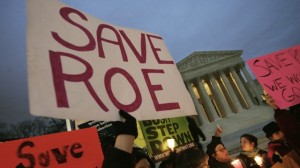 Because of that, we’ve seen attacks against women’s reproductive health care across the country. It’s resulted in Texas with an outright ban on Planned Parenthood from participating in the new Women’s Health Program, subjecting many low-income women from getting the kind of care they need to prevent pregnancy or dealing with a current pregnancy they are not financially able to afford.

The logic that depriving women of reproductive health care that includes getting birth control pills or the morning after pills can only result in more unintended pregnancies that have a high probability of those women seeking to terminate them is lost on those who are forcing an all or nothing approach to the issue.

It’s a sad commentary that on the 40th Anniversary of Roe v Wade, perspectives have not progressed but regressed when it comes to women deciding for themselves whether their bodies, their psyche and their financial situations can handle giving birth.

“The last two years have seen the highest number of restrictions on women’s reproductive health care ever enacted in the states in the 40 years that Roe v. Wade has been the law of the land,” reports the National Women’s Law Center. According to NARAL Pro-Choice America, after the 2012 elections, legislatures controlled by opponents of reproductive health outnumber legislatures controlled by proponents. And in 21 states, both a majority of the legislature and the governor oppose abortion.

It’s rather ironic that the overriding conservative view that everyone should have the right to bear arms doesn’t extend to women having the right to decide whether to bear children. It’s hypocritical and completely contrary to what the majority of Americans believe.

Forty years after the Supreme Court issued its opinion in Roe v. Wade, significantly more Americans want the landmark abortion decision kept in place rather than overturned, 53% to 29%

For Latinas, who are born of a culture steeped in high regard for children and family, the option to decide for themselves whether or not to have children has always been a decision made with the utmost conscience. Termination of a pregnancy is not made lightly by Latinas but for those who live below the poverty line and know that any kind of social help to them is limited, if not banned, the decision to terminate seems more humane than to bring a child into the world who cannot be cared for, fed or loved properly.

According to Mujeres Latinas en Acción:

Forty years of ensuring that abortion remains a safe and legal procedure for a woman to consider, if she needs it. Yet, this has not necessarily been the case for Latinas. As we celebrate this anniversary, we must recognize that much work remains to be done. The issue of choice is not an option for Latinas because Latinas are the most uninsured.

According to the National Institute of Reproductive Health, 1 in 3 Latino/as are currently uninsured and young Latinas widely report that cost has prevented them from using prescription birth control. Without access to healthcare we don’t have access to options, and abortion through safe and legal channels may be unattainable for low-income and immigrant Latinas.

In addition to the economic barriers, the language and cultural differences may become a barrier. The term pro-choice does not easily translate or resonate with Latinas, despite the fact that Latinas’ support for reproductive rights including abortion dates back to Roe v. Wade. In addition, language and cultural differences are also an obstacle when immigrant Latinas are trying to communicate with a provider. The lack of information about family planning and resources available is another constrain for Latinas. The lack of access to healthcare is a problem that we need to tackle as nation. The Affordable Care Act (ACA) will provide the much needed access to healthcare to many but will leave out millions of undocumented immigrants, including Latinas who will not be able to access regular health care much less safe abortion.

Roe v Wade, 40 years later, remains relevant and a realistic choice for many, many women though it’s the unrealistic among us who would impose their religious and moral wills on women who know for themselves whether or not a pregnancy is what they can handle.

Because of the attacks on Roe v Wade, Planned Parenthood has launched a new campaign — Roe Is Here for Good.

The campaign is a battle cry as much as it is a declaration of war. As the creators of the campaign state on the site:

We won’t allow a small band of politicians and out-of-touch activists to interfere with a woman’s personal health care decisions. We won’t allow lawmakers to stand between women and their doctors.

On this 40th anniversary, those of us who trust women, who value their health and rights, have something to tell them: Roe is here for good.