LatinaLista — Arizona Senate Bill 1070 used to be considered the mother of all punitive immigration bills passed by a state legislature. However, the unimaginable has happened — it’s been replaced by a bill that has triggered uncommon and inhumane fear among the immigrant population of the state of Alabama.

Alabama House Bill 56 strives to make the state as unwelcome to undocumented immigrants as possible, and it’s working. 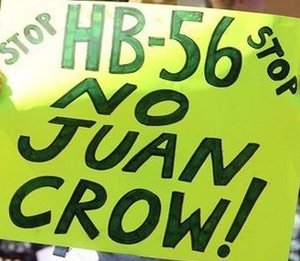 Record numbers of Latino school children aren’t going to school. Pregnant women are too afraid to go to the hospitals to deliver their babies. Workers aren’t harvesting the crops that need to be picked.

The bill is wreaking havoc on the state and yet, there are state legislators who think the bill is a great idea. Alabama Rep. Mo Brooks is very happy with the bill and says that all the consequences of the bill are not unintended as some would suggest but rather the objectives of the bill.

Yet, Brooks’ responses to a videotaped interview with Politico is chilling in his heartless responses and his blatant lies regarding undocumented immigrants in his state.

It hearkens back to a time when men like Rep. Brooks felt fully justified and entitled to deny the same basic human rights to blacks as those being denied to today’s Latino immigrants.

Being human doesn’t seem to be enough in the state of Alabama.

Today, Alabama educators and legal service providers joined national faith and child advocacy leaders to share the real stories of children and families impacted by the Alabama immigration law. The following quotes are released by the National Immigration Forum:

“A crisis is unfolding here in Alabama, and children, more than anyone else, are caught in the crossfire. Since the ruling last week, the Southern Poverty Law Center, the National Immigration Law Center, and other civil rights groups established a hotline for immigrants and citizens to report what is happening on the ground. We have already received close to 2000 calls in less than one week. Many of the calls are deeply disturbing and paint a grim picture of the aftermath of this ill-conceived law: people overwhelmed with fear; husbands who cannot take their wives to the hospital to give birth; sick people who refuse to go to the hospital to receive emergency care; thousands of terrorized children who are out of school; children who do go to school are subject to discriminatory treatment and harassment.

We have received outrageous reports of school officials who single out Latino children and asked them to raise their hand if they were born in the U.S. One wonders if the next step will be to simply ask them to wear a “yellow star”. We know of many localities that don’t allow immigrant families to have access to water services, denying them drinking water and plumbing facilities. Life as we know it has ended in Alabama -for both immigrants and US citizens alike.”

“I’m witnessing a lot of fear among immigrant families including families that own small businesses and employ taxpaying workers. They have revitalized the state with their hard work and entrepreneurship but now face the heart-wrenching decision of leaving their livelihoods behind to avoid being separated from their loved ones. As an educator, my duty is to educate students not check their immigration status.”

“Everybody is suffering and the children are suffering the most. It is a dark day for Alabama and for America when politicians praise a law that dehumanizes people and pushes children out of school. This unjust law not only affects unauthorized immigrants, U.S. citizen children are also bearing the brunt. ”

“It’s an outrage that policymakers in Alabama have decided to target the youngest members of society in the name of immigration enforcement. As a nation we must not allow laws like H.B. 56 to deny children their most fundamental rights and rob them of their future.”

The Most Reverend Jaime Soto. Bishop of the Diocese of Sacramento:

“Today, Alabama is making the wrong kind of history. Nobody wins when a state law tramples on the civil rights of immigrants and citizens alike. The impact on children and families is nothing short of terrifying, and we should not play politics with children’s lives. It runs against every value we hold as Americans.”