LatinaLista — Whenever citing areas where Latinos lack “responsibility,” healthcare is always mentioned. Whether it’s women not getting mammograms, men not going for check-ups, diabetics not following through with treatment, families not eating nutritiously and on and on, Latinos are faulted with not taking care of their health. 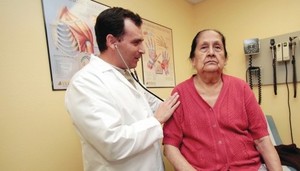 Yet a new study coming out of Massachusetts shows that when healthcare is affordable and accessible, Latinos are just as conscientious about seeing their doctor as anyone else.

Boston University School of Medicine professor Nancy Kressin led a study that found more low-income and Hispanic adults in Massachusetts underwent knee or hip replacements and 15 other elective inpatient surgeries after the state expanded health insurance coverage to nearly all its residents in 2006.

A separate study in 2010 by the Urban Institute for Blue Cross Blue Shield found that:

…within three years of the law passing, non-white patients were about as likely as white patients to have seen a doctor in the past year, closing a gap from 2006.

The fact that more low-income Latinos received elective inpatient surgeries isn’t a matter of them abusing the system but because they were able to see a doctor who thought their conditions warranted these surgeries.

As the presidential election shifts into high gear, campaign rhetoric boasting about doing away with Obama’s healthcare plan could be a huge turn-off to those Latino voters who are counting on having coverage like their fellow Latinos in Massachusetts and their fellow citizens who are in a higher income bracket.

The MA study serves as a snapshot to what could happen in the rest of the nation if all people had equal access to quality healthcare and could pursue needed surgeries without having to make a choice between food/housing and quality of life. People would have more motivation to take care of their health, follow through with their doctor’s advice and be on the road to not just being healthy but relieving the burden on local economies with too many trips to the ER for conditions that are easily fixable — with a doctor’s diagnosis.