LatinaLista — For the Ojeda Jimenez family of Oaxaca, Mexico, the Mayan doomsday prediction came early. On January 1, 2012 at 2 a.m., the family’s son, Quelino Ojeda Jimenez, died at the age of 21 in a Oaxaca hospital. Quelino was a good looking guy and a hard worker. Coming from a poor Mexican village that had nothing but dirt roads, thatch roof huts and no job opportunities, Quelino couldn’t wait to come to the United States and start working. 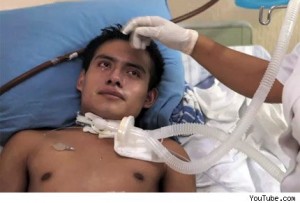 He couldn’t wait to get in an imaginary line that still insisted on charging money for fees and visas. Money he didn’t have. But he knew if he made it to this side of the border, he could start working and send money home to his family to start providing the kind of quality of life that is a universal human right.

So, Quelino came to the United States illegally with one goal – work. He found it with a roofing company. Everything was going well until Quelino tugged on a sheet of metal. He thought it was nailed down; it wasn’t. He fell four stories. Hitting the ground left him unable to move his body. He would soon learn that he was going to have to live his life as a quadriplegic.

Over the next four months, Quelino received treatment at Advocate Christ Medical Center in Oak Lawn, Illinois. Yet, the bills were mounting and there was no one who was going to pay for Quelino’s bill or ongoing treatment. The hospital made a decision without consulting Quelino — deport him back to Oaxaca, Mexico.

As soon as the hospital administration announced their plans, it was greeted with anger and surprise by the local Latino community, some of whose members had volunteered to care for the young man. When Quelino heard what the hospital wanted to do, he was struck with fear. For him, it was a death sentence. He knew that his parents wouldn’t be able to afford to pay for the care he needed and he knew the hospitals in the area weren’t equipped to give him the kind of care that had allowed him to beat death thus far.

Sadly, he was right.

The death of Quelino outrages many who see his death as preventable if he had been allowed to stay in the United States. Yet, it’s also true that our current healthcare system has little sympathy for people, regardless of their citizenship status, who can’t pay their bills.

This was a bad situation all the way around and should serve as an unforgettable example as to why immigration reform is needed.

In the event of a catastrophic event like Quelino’s, the coverage should include the option for that worker to return to their native country to receive comparable care at an equally comparable facility.

But there is no immigration reform policy now and so the big question is why doesn’t Mexico do more for their repatriated citizens who come home broken?

Before his accident, Quelino was sending his family money. In a video shot by a Chicago Tribune reporter of Quelino’s family inside their very modest hut, a shiny stainless steel refrigerator stands oddly out of place. Chances are Quelino’s sweaty labor bought that for the family.

We know that remittances not only help the families but help the economy of Mexico too. In Quelino’s case, and others like him, Mexico should step in and help provide the care and support that well-to-do Mexicans can enjoy but are hardly, if ever, extended to the poorest of the country who live along dirt roads under thatched roofs.

Deporting migrants, who have suffered a health crisis while doing work for the U.S. economy, but who had been supporting families back home through remittances, demands that both the US and Mexico (or any country where the family lives) share in the care and treatment of that migrant since both countries benefited from the work, sacrifice and health of that person — who just wanted to work.