Debunking (yet again) false claims about security fears at the U.S.-Mexico border

LatinaLista — A new report by the Center for American Progress on the safety of the U.S.-Mexico border reshines a light on conditions that most locals have been confirming all along — things aren’t as bad as some in Congress say. 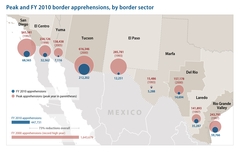 The report, Safer than Ever: A View from the U.S.-Mexico Border: Assessing the Past, Present, and Future, explores how past and current measures to halt illegal immigration have worked and created a new strategy for border residents going forward — if only Congress could come to grips with the reality that exists and not the one they want to create.

The following is the Introduction for the report by its author, Marshall Fitz, director of Immigration Policy at Center for American Progress.

A recent trip by this author and several colleagues to study the Arizona border was eye-opening. Not because we encountered scores of headless bodies, but because the border landscape has changed so dramatically in the last five years both literally and figuratively.

Hundreds of miles of severe fencing, vehicle barriers, radio towers, flood lighting, and access roads have degraded the border’s aesthetics and environmental quality. But in conjunction with surges in manpower and technology, this added infrastructure has also undeniably and fundamentally enhanced the Border Patrol’s ability to prevent and intercept unauthorized migrants and smugglers.

All the recent statistics tell us that illegal immigration flows at our southern border have slowed dramatically. Numbers tell us that we no longer have a border across which thousands of people traverse illegally every day without our knowledge.

Instead we have a border where the vast majority of attempted entries are identified and a far larger percentage of entrants are apprehended than ever before. Moreover, recent reports persuasively demonstrate that violent crime rates along the U.S.-Mexico border have been falling for years and that border cities of all sizes have maintained crime rates below the national average.

A first-hand view only emphasizes the point while begging an even bigger question: Why hasn’t the story of this transformation penetrated the national dialogue on immigration policy?

Rather than acknowledge the remarkable advances that have occurred, immigration reform opponents level sensational–and often patently false–claims meant to scare the public about border violence and insecurity.

Although everyone is entitled to their views, our policymakers should not be entitled to mislead the public about something as important as border security merely to advance an ideological policy agenda.

This report rebuts these policymakers’ fallacious claims and argues that the changes on the ground at the border demand a change in the conversation in Washington.

We first catalog the massive resource deployment and infrastructure buildup at the border since 1993. We then describe the profound impact that deployment has had on unlawful migration flows: Fewer attempted entries plus a greater rate of apprehension equals a steep decline in successful illegal entries.

Next we detail a number of unintended negative consequences that have resulted from advancing this border buildup without enacting concomitant reforms.

Finally, we argue that the circumstances on the ground present us with a unique opportunity to secure the gains in border control while negating the counterproductive byproducts of those gains.

The chairman of the Judiciary Committee, Lamar Smith (R-TX), and his restrictionist allies dispute President Obama and Homeland Security Secretary Janet Napolitano’s assertions that the border is more secure than ever before.

They hang the full weight of their contention on one flimsy hook: a recent GAO report concluding that DHS has 44 percent of the southern border under “operational control.” Glibly analogizing to a classroom grading scale, restrictionists argue that 44 percent is a failing grade for the agency.

This simplistic analysis ignores the basic facts on the ground and distorts the meaning and significance of the report.

First, some context. In order to devote more intensive resources to areas along the 2,000-mile-long border where threats are the greatest, DHS has adopted a flexible set of standards that establishes tiered levels of control based on risk.

From highest to lowest, the standards are: “controlled,” “managed,” “monitored,” and “low-level monitored.” The agency is and should be resourced to “detect, respond, and interdict” incursions in high-threat, high-traffic areas.

Similarly, it’s a waste of resources to establish that same level of stringent control in remote areas with inhospitable terrain where very few individuals are attempting to enter.

The GAO report found that 44 percent of the border met DHS’s top two standards–” controlled” or “managed”–which DHS defines as areas where it has “the ability to detect, respond, and interdict illegal activity at the border or after entry.”

Far from representing a failing grade, that is a remarkable accomplishment. Moreover, two-thirds of the remaining 56 percent meets the third level of control: “monitored,” which means DHS can detect but not necessarily respond to or interdict all incursions.

In fact, the GAO report–and every other independent evaluation of the border– negates the very claim that Smith is making. The enforcement resources deployed at the border are historic in size and effectiveness. The ability to observe, intercept, and impose consequences on border crossers and smugglers has never remotely approached the level it has today.

But the unreasonable position advanced by the restrictionists is that 100 percent of the border must be subject to the most stringent standard, i.e. “controlled.”

Rep. Smith is effectively demanding an absolute seal of the border–an unattainable objective–as a precondition to discussion of broader immigration reforms. This is akin to requiring a big-city chief of police to meet a zero-crime benchmark before undertaking other necessary criminal justice reforms.

In other words, they have not only moved the goalposts back but they have pushed them off the field and out of the stadium.

The objective benchmarks mandated by immigration hawks in Congress as a prerequisite to broader immigration reforms have been met or exceeded, as we have demonstrated on numerous occasions.

The unparalleled buildup of infrastructure and personnel at the southern border outlined in the report should speak for itself.