Latina Lista: News from the Latinx perspective > Palabra Final > Politics > Foreign policy debate won’t be complete without a weigh-in of Mexican cartel presence in US

LatinaLista — Tonight’s debate is supposed to be focused on foreign policy. Rumors are swirling that the conversation will be more about the economy than global allies and enemies. Yet, there is one important foreign policy issue that has yet to be discussed by either candidate and it’s one that may impact the security of this nation more so than Afghanistan, Iran, China or Russia. 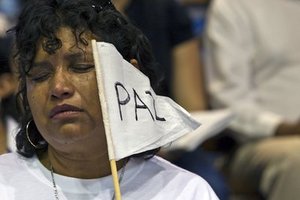 It’s Mexico. Unfortunately, the real crisis that exists with our southern neighbor isn’t over undocumented immigration — it’s the drug cartels.

Whether it’s out of ignorance or it’s the only way the GOP knows how to rile up their base, the undocumented immigration issue has become the be-all-end-all issue when referring to border security and domestic terrorism but it’s not the right issue.

US law enforcement knows drug cartels have infiltrated the United States in every part of the country. They are not only trafficking in drugs but in money laundering, behind the escalation in murders in some cities and also profit from human trafficking and prostitution.

What is even worse, if there can be something worse, is that because of the money they can offer to gullible, greedy people, the cartels are replicating in the US the same level of corruption and easy recruitment of people to do their dirty deeds — actions that have caused Mexico to be declared a failed state too many times.

Already, too many US citizens have been caught in the web of the cartel because of the lana (money).

This is the foreign policy issue that poses a more direct threat to US citizens, innocent Mexican migrants and the future of this country. It is on our doorstep and yet neither party is willing to recognize the more immediate threat this issue poses to the security and safety of our country and everyone who calls the US home.

Maybe it’s just easier to fight about a war in a country half way around the world where we don’t hear the shots fired, the bombs dropped or see the mangled, dead bodies of our soldiers or fellow citizens — but it is already happening at home. The only difference is the combatants in this war aren’t wearing uniforms.