Is the American public reaching a tipping point over legislators’ handling of illegal immigration?

LatinaLista — This Thursday, Alabama was to have implemented one of the harshest immigration crackdowns in the state’s history. Yet, a judge has temporarily blocked enforcement of the law until she can determine whether or not it is constitutional. 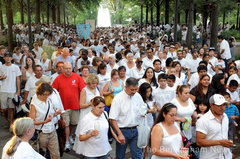 She will issue a ruling on September 28.

Require schools to verify the citizenship status of students.

Make it a crime to knowingly assist an undocumented immigrant by providing them a ride, a job, a place to live or most anything else.

Local reports say that both opponents and supporters of the law are claiming victory with the judge’s announcement. However, immigration attorneys, religious organizations and civil rights groups have consistently raised red flags over the law ever since the state’s governor signed it.

According to immigration attorney Michael Wildes, “This Alabama law is a clear attempt to pre-empt federal legislative and enforcement power with regard to immigration. In fact, it seems to go further in an attempt to not only deputize local Alabama law enforcement, but also to enlist schools, employers and would-be good Samaritans by forcing them to ignore the needs of those who might need their help.

“Even in the face of federal legislative inaction, this harsh state law forces all citizens of Alabama to enact a personal policy of reasonable suspicion towards anyone who appears to be unlawfully present, or else they too may be held criminally responsible for their neighbor’s immigration status.”

The outrage over the Alabama law, and other laws like it throughout the nation, is reaching a tipping point with the American public. Unlike before, civil rights groups, religious organizations and grass roots are being joined by businesses and community leaders who are displeased with how legislators are handling the immigration issue.

One Evangelical author puts the entire immigration debate into perspective.

Evangelical leaders realize that this status quo is a broken mess; they are not advocating that mercy for immigrants should trump the law, but that we must restore the rule of law, prescribing a punishment for unlawful entry and unauthorized work that fits the crime (think: the equivalent of a fine for speeding down the highway, rather than having your driver’s license revoked).

The Comprehensive Immigration Reform that evangelical leaders have advocated would require those here unlawfully to pay a monetary penalty and earn the right to become lawful permanent residents, but it would also insist that in the future we put into place a reasonable number of visas, tied to the priorities of economic growth and family unity, and that from here on out we strictly enforce the law, both against immigrants and employers who break the law.

That sort of a plan brings together the biblical mandates to be subject to the governing authorities (Romans 13) and to show love and kindness to the immigrant (Leviticus 19), rather than pitting two biblical commands against one another. As pastor and theologian John Piper has said, “it gives honor to the law and it gives mercy to the immigrants.”