Latina Lista: News from the Latinx perspective > Palabra Final > Immigration > Latest immigration enforcement measures have many Latinos wondering if Pres. Obama is crying wolf on being an ally

Latest immigration enforcement measures have many Latinos wondering if Pres. Obama is crying wolf on being an ally 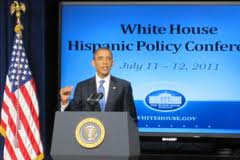 It’s a plea the Obama administration has been making all along to the Latino community since the DREAM Act failed to pass last year. According to the article, Obama told a group of Spanish-language newspaper journalists gathered at the White House:

“The problem right now is not on the Democratic side. … Everybody for some reason is letting the Republican Party off the hook on this issue, either by hoping that I can take a unilateral action or that somehow Democrats can change the way Congress works,” Obama said during a roundtable Monday with journalists for Spanish-language U.S. newspapers. “The fact is, is if Latinos all across the country said, ‘Until the Republican Party is willing to cooperate on bipartisan, comprehensive immigration reform, we can’t support the Republican Party,” I promise you that’s something that would get the attention of the Republican Party.”

“But that’s not where the energy is. So much time has been spent trying to see if we can do something administrative,” Obama complained, according to an account by Antonieta Cadiz in La Opinion. “It’s as if people just give up on the idea of ever changing Republicans’ minds and, as a consequence, they don’t feel any pressure to try to do the right thing when it comes to immigration reform. That’s where the pressure needs to be applied.”

Somos estupidos. We thought that the President of the United States did have special authoritative powers that Congress didn’t have. Maybe we were wrong. Who knew the President has the same powers as Congress but just uses another address?

The reasons why the Latino community continues to hound the administration for action on the deportation issue and immigration reform are because of two things: He’s the President and does have the power to relieve the harshest deportation record perpetuated against undocumented immigrants of any administration and the Republicans can do nothing immediate to alleviate the problem.

In response to how some Immigration and Customs Enforcement agents are abusing the implementation of the infamous Secured Communities program and targeting immigrants who are guilty of minor infractions rather than the program’s intended serious criminal aliens, President Obama said:

“One of the things that [Immigration and Customs Enforcement (ICE)] has done is to provide more direction to its agents out on the field, in terms of what are the priorities; how are we focusing on the most serious criminals,” Obama said. “That does not mean that that has all embedded itself at the operational level. So there may be still situations where there are resources being used, in terms of deporting somebody who had a DUI or had some other minor traffic violation. But overall, the direction that’s being moved in is to say, look, you should prioritize.”

President Obama’s response leaves open to interpretation two possible scenarios: He is acknowledging that he doesn’t have control over ICE and that there are some agents operating under their own agenda or contrary to the fanfare of announcing there would be a renewed effort to only target those undocumented immigrants who are true criminals, the original intent has never changed — find and deport all undocumented immigrants whose paths you cross.

It would seem that it’s the second reason, especially given that ICE recently released a memo telling state governors who wanted to opt out of Secured Communities that they had no option but to stay in the program.

If President Obama sincerely believes most ICE agents are not abusing their power then he really is out of touch with what is happening in our communities. A story that ran over the weekend in the Miami Herald revealed that Border Patrol agents are increasingly targeting Greyhound buses and Amtrak trains to find, apprehend and deport undocumented immigrants.

The reason the agents say is to disrupt human smuggling rings bringing victims into the interior of the country. It’s a crime that does need to be stopped but that doesn’t justify apprehending and deporting undocumented immigrants who are innocently riding either Amtrak or Greyhound to go to school, visit friends or family. This is where the discretion on behalf of the agents, promised by the Obama administration and the Dept. of Homeland Security, should be taking place — and it isn’t.

And yet, President Obama is still telling the Latino community that our efforts should be focused on Congressional Republicans — all the while his administration continues deporting at a record pace at the same time soliciting Latino support for his 2012 campaign.