LatinaLista — Within minutes of Texas Gov. Rick Perry’s appearance at the National Association of Latino Elected Officials (NALEO) conference last week in San Antonio, I was receiving emails from colleagues and friends sitting in the audience. 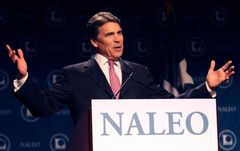 By now, most of the country knows that while Perry has achieved rock star status at Tea Party rallies and GOP gatherings, he didn’t carry the same clout at last week’s Latino conference.

Maybe it was the “lame” joke he made. According to a source, Perry joked about how perfect it was to appoint Jose Cuevas to the Texas Alcoholic Beverage Commission because his name sounds so much like the tequila — Jose Cuervo.

Throughout his short talk, Perry made a point to say that he’s appointed several Latinos and Latinas to high-ranking positions — for example, Hope Andrade, the first Latina Secretary of State for Texas. Yet, seeking applause for doing something in a state that is 38 percent Latino, and non-Hispanic whites stand at 45 percent, seems rather disingenuous.

Yet, what can be expected from a man who likes to tell the public that he has created the most jobs in Texas, but conveniently forgets to say they are low-skilled jobs (read Mcjobs) and how his lack of support for public education, where the majority of students in urban school districts are Latino, consistently ranks low in the nation.

If Perry throws his hat into the presidential ring, it’s clear, after his NALEO appearance, he won’t be expecting too many votes from the Latino community — at least, until he stops trying to make Latinos the butt of his jokes.