Latina Lista: News from the Latinx perspective > Palabra Final > Politics > Latinos not looking for “Hope” from Obama administration, but sincerity

Latinos not looking for “Hope” from Obama administration, but sincerity

LatinaLista — Before President Obama even took to the podium at today’s NCLR conference there was the usual expectations — and the usual letdowns afterwards. 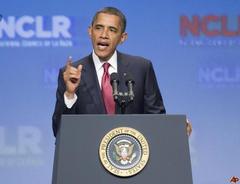 In a speech that seemed to regurgitate past rhetoric about the recession, jobs, the debt ceiling, immigration reform and the DREAM Act — talking about the issues but not delivering any concrete substance that would make the audience jump to join a “Yes, we can” refrain, the speech didn’t deliver like in the past. Namely, hope.

President Barack Obama serves as the keynote speaker at the 2011 NCLR conference.

Ironically, when the President made his usual remarks about how some people wished he could bypass Congress, a spontaneous burst of “Yes, you can; Yes, you can” sounded from the audience and it was the single biggest burst of enthusiasm that marked a speech met more with polite applause rather than the boisterous round of claps that marked his 2008 campaign speeches.

In those speeches, hope was the running theme. Hope inspired, excited, enthralled and motivated people to embrace Obama’s candidacy for president.

It will be a harder sell this time, for sure.

It is disappointing that we will have a candidate who won on the votes of a demographic he promised to do so much for and ultimately for whom he has achieved so little.

Grant it, these are unusual times and the needs of the nation had to take precedence over the needs of 50 million, and it’s well-known that immigration reform, the DREAM Act and deportation are issues that make the GOP recoil into their alternate reality of “No, no, no.”

For example, in a speech that states “…we are enforcing flawed laws in the most humane and best possible way,” is hypocritical when there are so many families being torn apart with deportations over minor offenses.

An Associate Press analysis revealed that:

An additional 13,028 were deported last year after being arrested on less serious traffic law violations, nearly three times the 4,527 traffic offenders deported two years earlier, according to the data.

There are many in the Latino community who are tired of the administration’s stall tactics or lack of political will to make a major push on these controversial issues. To show their frustration with the White House, they are pushing back.

Among the issues, NALEO urges President Obama to strongly promote and support negotiation and passage of the DREAM Act. The President should also provide a more clear and expeditious process for implementing prosecutorial discretion to defer removal of DREAM Act eligible youth.

We also urge the President to ensure that the U.S. Department of Justice (DOJ) vigorously enforces the Voting Rights Act of 1965 to protect Latinos from discrimination in the electoral process.

Congressman Luis V. Gutierrez, an outspoken critic of the President’s handling of the deportation issue, heads a rally outside the White House on Tuesday joined by his Congressional colleagues Congressmen Raul Grijalva (AZ), Mike Honda (CA) and John Lewis (GA). The rally, which begins at 3 p.m. commemorates the more than one million people who have been deported since President Obama’s election.

The rally is to tell President Obama to stop deporting DREAM students (those young people who would be eligible for the DREAM Act), keep families together, and freeze Secure Communities — a program that empowers local law enforcement to take into custody undocumented immigrants.

This rally is but one of many Congressman Gutierrez has held across the country challenging the President’s sincerity on stopping unnecessary deportations.

After listening to President Obama’s speech today, the expectation is not hopeful that anything will change.