LatinaLista — A new analysis of who U.S Immigration and Customs Enforcement agents have been ‘detaining’ and processing for deportation from 2008 to early 2012 is both a relief and cause for concern. 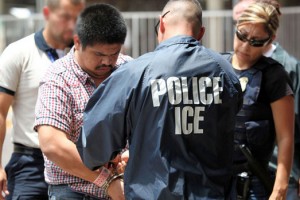 According to a report issued by the Transactional Records Access Clearinghouse (TRAC) on immigration enforcement, 77 percent of the ‘immigration holds’ placed on people in law enforcement custody were individuals who had no criminal record — “either at the time the detainer was issued or subsequently.”

A remarkable piece of data to get since TRAC authors report that ICE officials were less than forthcoming when asked to report on the nature of the crime for which the individual had been convicted.

For the remaining 22.6 percent that had a criminal record, only 8.6 percent of the charges were classified as a Level 1 offense.

That’s good news. It means that the tired excuse that terrorists or hardened criminals are slinking across our southern border meant to do US citizens harm or threaten our national security is a non-issue for practical purposes.

The bad news is that the emotional damage done to many otherwise innocent families has been extensive.

If 77 percent had no criminal record then their only crime was trying to support their families.

The report gives a snapshot of who the detainees were:

It’s troubling that our country would subject 5,895 youth under the age of 18 to deportation proceedings and almost 29,000 senior citizens. The assumption stands that the majority of the youth were classified as DREAMers and the seniors most probably had lived a good portion of their adult lives in this country.

Yet, what’s even more disturbing and gleaned from the data is that some US citizens had their constitutional rights violated because ICE agents mistakenly put them into immigration detention.

It’s clear from this data that ICE and the Department of Homeland Security need to have an oversight board to hold them accountable but most importantly ensure their transparency.