LatinaLista — Lately, the Obama administration has been touting its record for deporting the most undocumented immigrants — nearly 400,000. 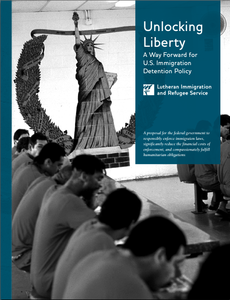 It may seem those are the lucky ones given the information discovered in the recent broadcast of the PBS documentary Lost in Detention which revealed the sexual abuse suffered by female immigrant detainees at the hands of their guards.

The information was so revolting that Congressman Sen. Dick Durbin felt compelled to refer to the documentary when questioning Department of Homeland Security (DHS) Secretary Janet Napolitano, during a Senate Judiciary Committee hearing. He pointedly asked Sec. Napolitano how DHS is keeping immigrant detainees safe from sexual abuse.

Though Napolitano didn’t have a good answer, it’s clear that the safety of these detainees — who are not criminals, but just immigrants without their proper paperwork — wouldn’t be an issue if the nation’s detention policies underwent some much needed revisions.

Today, the Lutheran Immigration and Refugee Service (LIRS) released a report that explores key policy reforms that could solve the issue.

Titled Unlocking Liberty: A Way Forward for U.S. Immigration Detention Policy, the report reveals that on any given day more than 33,000 immigrants are imprisoned in a national network of about 250 federal, state, private and local jails.

What’s really sad is that many of them are refugees or survivors of torture or human trafficking. To think that some of them have to endure another round of cruelty at its extreme, especially in a country considered a “beacon of hope,” is beyond outrageous.

The report goes on to detail how there are alternative methods to detention that have proven to be successful, less traumatic to the immigrant and his or her family and compliant with the national standards of human rights.

The authors further describe specific steps Congress and Immigration and Customs Enforcement can take to relieve the issue as well.

• Codify the maximum length of and reasons for detention consistent with international human rights principles of due process, prohibition of arbitrary detention, and freedom of movement.

• Expressly define the levels of restriction that amount to constructive custody.

• Create and implement policies and regulations to avoid detention unless necessary.

• Develop, implement, and evaluate a standardized method that is subject to judicial review and that will assess the need to detain as well as the risks of detention for vulnerable populations in need of special protections or support.

• Ensure that detention is only used in cases when the U.S. government has proven that none of the less restrictive alternatives to detention is appropriate.

• Develop, support, and engage community-based programs and resources that increase access to case management, legal services, and other support.

Yet, since detention is such a profitable business, the chances of reform happening is slim unless reports and documentaries on the issue continue to get the attention of Congress, who in turn, will start asking the questions that need to be asked and demanding the solutions it will take to get otherwise innocent people out of detention and reunited with their families.

Until that happens, more people must be Washington’s and society’s eyes and ears. On the Lutheran Immigration and Refugee Service’s web site, there is a document detailing the new procedures ICE has created in establishing a national standardized request process to visit or tour detention facilities.

Under these new procedures, detention facilities are bowing to public pressure that human rights and faith groups have more access to the detainees — a necessity for the truth of immigrant detention to be told.