LatinaLista — On the third Monday of every January, the nation observes Martin Luther King Day. Both in history and folklore, Dr. King is remembered as someone who fought for racial equality in this country. However, 48 years after delivering his inspirational “I have a dream” speech, after the nation has elected its first African American President, and after the crown for “Queen of Talk” was bestowed on an African American woman by the name of Oprah, the assumption would be that racism no longer exists in this country. 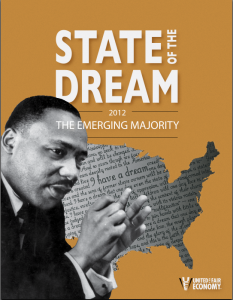 Unfortunately, racism is as much a part of our lives today as it was during the Civil Rights Movement and before then.

United for a Fair Economy released a new report today titled “State of the Dream: 2012 The Emerging Majority” detailing what more needs to be done to achieve Dr. King’s dream. The authors report that though the country will be majority-minority by 2042, conditions for people of color won’t be any better, and may get worse, if present-day trends continue along the same path.

Although there have been many social and economic gains made for all races, people of color continue to be left behind. Vast racial disparities still exist in wealth and income, education, employment, poverty, incarceration, and health. Extreme inequality continues to entrench racial disparities and further shrink the broad middle class that has been the foundation of a strong American economy and a cohesive society.

The authors cite that the only way to stem the doomsday predictions for communities of color is for everyone to have the same opportunities for political influence which means reducing the money in politics and protecting and restoring the voting rights of all Americans.

Somewhere along the way, it has become acceptable in this nation to have a large underclass — undereducated and underpaid. It’s a class that is supposed to be OK with low-wage jobs, live in substandard housing or poorly serviced parts of the city, send their children to poorly maintained and staffed public schools, live in neighborhoods classified as “food deserts,” accept wage disparities and tolerate the insults and stereotypical rhetoric of politicians.

Vast racial disparities continue to exist across nearly all economic indicators more than 40 years after Martin Luther King, Jr. was murdered. The current racial economic divide is born of the ideology of White supremacy. The policies that tolerate or worsen the divide and perpetuate our national history of racial oppression are many, and include recent examples. The role of racism in public policy was perhaps most vividly dramatized by the official preparations for Hurricane Katrina in 2005, when New Orleans officials decided that shoring up the levees that would have prevented the loss of lives and property in the heavily Black Lower Ninth Ward was a waste of time and resources.

The recent recession has only highlighted the disparities among racial groups that were always present but hidden just beneath the fabric of our economy. When things exploded in the economy — housing crisis, unemployment, rising food prices — the nation saw just how vulnerable the most vulnerable in the nation really were.

Some organizations and community leaders have tried to help affected Black and Latino families while some politicians have called for cutting all “entitlement” programs that serve as a lifeline for these families and the low-income in these times. Yet, with a call to cut spending on helping these families in need, there’s no talk about reforming the current trends.

Without reform, the report’s authors say:

Previous Post Spotlight Nonprofit: Lifting the spirits of cancer patients with "Hugs and Kisses"
Next PostTracing the root causes for Latino immigrant students' struggles and successes in American schools