LatinaLista — By now, most people recognize Wayne LaPierre’s face than remember his name. It’s no wonder. Ever since the Sandy Hook Elementary School massacre, he’s been on the offensive on behalf of the National Rifle Association where he’s the executive vice president. 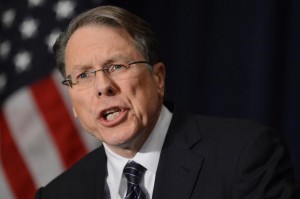 LaPierre has gotten a reputation for being a staunch defender of gun rights with arguments that often lack logic and most often the truth. The latest LaPierre proclamation as to why United States citizens need their guns carries the same earmarks of his past arguments, but this time threatens to intrude into the delicate debate getting underway in DC over immigration reform.

Last week, LaPierre published an oped in The Daily Caller where he outlined all the reasons why people need their guns. Among his reasons had to do with Latinos and the US/Mexico border:

Latin American drug gangs have invaded every city of significant size in the United States. Phoenix is already one of the kidnapping capitals of the world, and though the states on the U.S./Mexico border may be the first places in the nation to suffer from cartel violence, by no means are they the last.”

“The president flagrantly defies the 2006 federal law ordering the construction of a secure border fence along the entire Mexican border. So the border today remains porous not only to people seeking jobs in the U.S., but to criminals whose jobs are murder, rape, robbery and kidnapping.”

While there is a kernel of truth in both statements, it’s a small kernel but enough to make it dangerous for Latino citizens. From the context of his remarks, LaPierre calls out real dangers — cartel violence and criminals coming across the border. Yet, neither situation is justification for citizens carrying arms.

For starters, we’ve seen in the past where gun-happy vigilantes in their quest to hunt undocumented immigrants or cartel criminals almost always end up hurting, if not killing, innocent Latino citizens. People with guns gets itchy fingers when they think they’re around people who their ‘leaders’ say are dangerous and criminal, just because they have brown skin or speak with an accent.

We’ve already seen that average people tend to racially profile when they see Latinos who fit their perception of a gang member or undocumented immigrant. Add that to someone saying that Latinos are dangerous and American citizens must be armed to protect themselves and their families from ‘criminal Latinos’ and it’s a huge recipe for more senseless killings.

LaPierre’s arguments in this particular oped are not only offensive to Latinos but dangerous. We’ve already seen that mental health issues play a big part in these indiscriminate killings. Those who suffer from such illnesses don’t worry about whether a particular Latino is a criminal or gang member or not, he/she is Latino and in their mind that’s reason enough to shoot.

The last thing needed is an authority figure, of even a small faction, to lump Latinos together as a threat against this country just to create justification for an argument that has no merit in the first place.