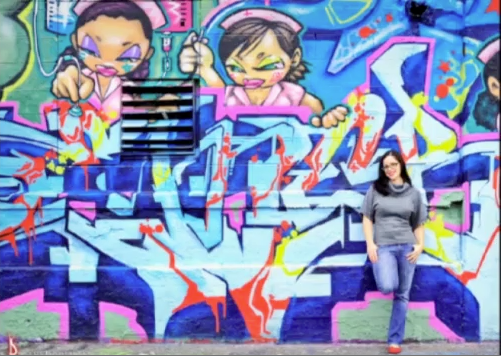 LatinaLista — When Jessica Pabón sees graffiti on the side of a building or on a New York City subway train or in a restroom stall, she doesn’t think of gang members or vandals. She wonders if a woman created the urban art.

Pabón studies the works of women graffiti artists. From New York to Chile to Japan and South Africa, Pabón travels the world interviewing and documenting the lives of female graffiti artists. She explores their motivation, their style, how they operate in a male-dominated subculture and how they let the world know they were there.

So far, she has interviewed over 75 women graffiti artists and shares her research with readers on her blog. In a TEDx talk, Pabón discusses how the backgrounds of each of the graffiti artists she’s interviewed challenge conventional expectations. The artists may ‘tag’ at night, but during the day they come from all walks of life — biologists, CEOs, editors, mothers, and teachers.

They are feminists who live their femininity through their art and use it to distinguish themselves in a male dominated shadowy world.