LatinaLista — Slowly the realization is hitting home with some US politicians that Mexico’s relationship with the United States is so deeply intertwined with our own history and society, unlike other foreign countries, that it’s no longer excusable to ignore or dismiss the feelings, wishes or opinions of the Mexican public. 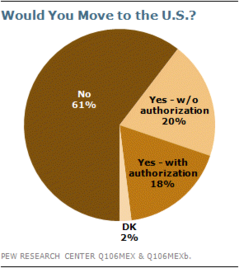 A review of a new survey on Mexican attitudes by the Pew Research Center’s Global Attitudes Project reveals a surprising profile that flies in the face of anti-immigrant rhetoric that has dominated Washington and threatens to repeat itself in the upcoming 2012 election.

According to the survey:

Fewer than half (45%) of Mexicans say their government is making progress in its campaign against drug cartels.

A slim majority (52%) of Mexicans hold a favorable view of the U.S., while 41% express a negative opinion.

Mexicans are less likely than they were two years ago to say that people from their country who move to the U.S. have a better life than those who stay in Mexico. Fewer than half (44%) now say this is the case; 22% say life is worse in the U.S. and 29% say it is neither better nor worse.

Most Mexicans say the military and the media are having a very or somewhat good influence on the way things are going in Mexico (62% and 60%, respectively)