LatinaLista — It must certainly seem to President Obama that no matter what he does, he just can’t make Latinos happy. 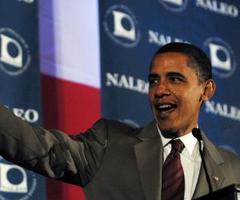 He invited various “stakeholders” and Latino community leaders and celebrities to the White House to talk about immigration reform and everything he can’t do to get it passed in Congress, and no one is happy.

They’re not happy that he won’t exercise some of his discretion as Commander-in-Chief to put a moratorium on deportations to alleviate the painful family separations.

He had a hand in getting John Morton, the Director of Immigration and Customs Enforcement (ICE), to make changes to the Secure Communities program. A program that had been flexing their definition of “criminal aliens” to include minor traffic violators, along with, murderers and drug dealers.

The community response has been less than the expected enthusiasm for the changes. Most who advocate or work in these Latino communities feel that the entire program should be dismantled altogether.

So far, any changes to apprehending and deporting undocumented immigrants or tackling immigration reform has been out of the President’s hands, as he has pointed out.

Yet, there’s one thing that isn’t out of his hands — attendance this weekend at the National Association of Latino Elected and Appointed Officials (NALEO) Conference to be held in San Antonio.

When running for president, Obama promised he would attend as a sitting president. Going on three years, he has yet to make good on that promise.

It doesn’t take imposing any special Executive power to put in some face time at the conference that is routinely attended by over 1,000 Latino elected officials from across the country.

If ever there was an audience that could commiserate with how President Obama must be feeling — pulled one way by constituents and the other by civic duty — it would be this audience.

To snub this group, which represent the creme de la creme of Latino politicians is as insulting as it gets to the Latino community as a whole.

Because if our political leaders aren’t respected, chances are there’s no respect for Latino constituents.