LatinaLista — The Black Youth Project has released a report analyzing youth voter turnout in the 2008 election. While the report, DEMOCRACY REMIXED: BLACK YOUTH and The Future of American Politics, was intended to be a focus on black youth, the report equally focused on Latino and white youth voter turnout for comparison’s sake. 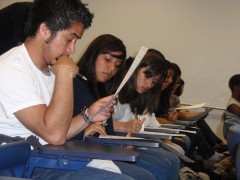 What was (re-)discovered is that youth voter turnout overall had a lot to do with gender — across the board, more females of every racial group voted than their male counterparts; education — those with higher levels of education turned out in higher numbers; and income — those youth from higher income families tended to cast their votes in higher numbers than low-income voters.

These revelations are not new but what was interesting about the report was that the authors equated the turnout motivation for young voters to a movement.

In some ways, the upswing in youth political engagement that corresponded with the 2008 election resembled something of a movement more than it was electoral politics as usual. The enthusiasm and interest that the campaign generated among young people recalled the social movements of the 1960s and 1970s that were oriented around civil rights and the antiwar movement and were led primarily by young people in the days when 18-year-olds were unable to participate in electoral politics.

The report’s authors go on to say that today’s young voters aren’t feeling that same kind of attachment to the 2012 political campaign and they question whether or not Democrats can re-energize that same feeling among the youth that was felt in 2008.

Already, many in the Latino community are predicting a downturn in Latino youth participation in the 2012 campaign. Considering that a good number of Latino youth who worked tirelessly for Obama’s election were undocumented, and they were the ones who walked neighborhoods, handed out campaign flyers, urged their neighbors to vote and made phone calls on his behalf, it doesn’t seem likely that these same youth will turn out like they did before given the Obama administration’s record on deportations.

Their hope for change to legalize their status, keep their families together, be allowed to attend college paying in-state tuition has been put on hold since Obama took office and went from promising immigration reforms to citing the impossibility of doing anything without bipartisan support of the same measures.

In fairness, the Obama administration has implemented several changes to immigration enforcement policies and procedures with mixed results of success, as seen through the eyes of the Latino community.

To say there continues to be disillusionment among Latino youth would be an understatement. Yet, it doesn’t mean that they want to see any of the current GOP candidates win either.

What it does mean is that these same youth who were so enthusiastic about the “hope for change” in 2008 don’t see that happening in 2012.

Unless something significant comes out of the White House that benefits Latino undocumented youth before November, that delivers on that hope that was promised four years ago, it looks like the Obama campaign will be on its own.

Previous Post Culture Clash at the Altar: My Wedding, My Parents, and Being Latina
Next PostArt in video: Latino team creates music video with a social message about bullying

Culture Clash at the Altar: My Wedding, My Parents, and Being Latina
Comment
Art in video: Latino team creates music video with a social message about bullying