LatinaLista — What some thought would never happen in the Lone Star State did. The Texas Senate passed a bill that now requires law enforcement officials to ask the immigration status of people who are lawfully detained or arrested — at least those who are Latino. 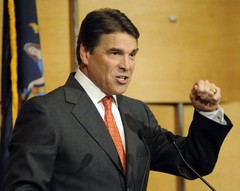 In a state, where the 2010 US census confirms, 38 percent of the population is Latino; is home to the top ten counties in the nation that are majority Latino; and where 21 percent of the businesses operating in the state are owned by Latinos, the passage of this “sanctuary cities” bill underscores how deeply ignorance and racism have penetrated this state once proud of its Mexican roots.

It’s a sad commentary that ignorance and racism directed at the Latino population is allowed to flourish with no reprimands. For example, last weekend at a rally on the steps of the Texas State Capitol, a Tea Party leader named Rebecca Forest, said:

If you want to know why we can’t pass legislation in Texas it’s because we have 37, no 36, Hispanics in the Legislature. All of the states that have passed legislation have a handful and I mean literally, some of them have NO Hispanic legislators, well, maybe 3 or 5 or something. So that’s, umm, part of our problem and we need to change those numbers. We need to do something about that.

To his credit, George Rodriguez, president of the San Antonio Tea Party, who was at the rally claimed he corrected her at the podium.

However, anyone reading Forest’s comments doesn’t come away understanding that she wants GOP Hispanics. Her solution is just to not have any Latino legislators then laws can be passed that meet with her and her party’s liking.

But that’s not democracy. And as much as democracy means two opposing sides coming together, it also means the freedom for voters to speak out against what they don’t like.

The Tea Party has done that brilliantly. They are a group of people who got together because they were mad about certain issues and they banded together to elect people who shared their views, as radical as they may be.

What about the Latino community?

Asinine comments, such as Rebecca Forrest’s, should be enough to make any Latino voter angry. The fact that Texas Gov. Perry felt such a bill was an “emergency priority” and included it in the legislature’s special session should have riled multi-generational Tejanos.

How Republicans have disenfranchised Latinos with a redrawing of the congressional redistricting map that gives a district, rightfully to Latinos, to Republicans is an action beyond insulting and harkens back to 1950’s politics.

The way a Texas state legislator scolded a Spanish-speaker testifying against the bill and told him he was “insulted” because the witness preferred delivering his testimony in Spanish should have garnered more outrage than it did.

But the Texas Latino community said nothing and continues to say nothing.

It doesn’t stand up for itself in the face of increasing insults and degrading comments. Rather, it prefers to let the young people or small number of Latino activists do all the political work while they go about living their lives.

Otherwise, these inexcusable politicians who continue to insult the Latino community will continue thinking they have nothing to fear — and they will be right.