LatinaLista — Roland Hernandez knows his idea on how to reform immigration is going to make a lot of people mad, but he’s willing to take that chance. Especially, if his idea accomplishes his main goals — rebuilding social security, providing better health care to disabled veterans and getting an accurate census of undocumented immigrants. 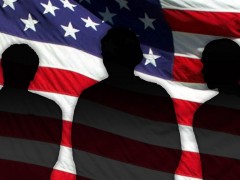 Hernandez, who lives in Houston, saw firsthand how his dad, a World War II veteran, received substandard healthcare in his last years battling Alzheimer’s. His dad’s low-income status prevented him from affording a higher quality of care. It was a problem Hernandez knew affected other senior citizens and veterans.

But in a cash-strapped country with a rising deficit, Hernandez knew that there was no money to tap into to funnel towards the care and well-being of the nation’s seniors and vets. Frustrated by the situation, Hernandez saw another issue that equally frustrated many people — illegal immigration. Suddenly, a wild idea started to form in Hernandez’s head.

What if every undocumented immigrant was required to get documented and pay for a work visa? And depending on how many undocumented immigrants live in a particular state, the federal government would have to share a percentage of that revenue from the work visas with the state? In turn, that money would be used by the federal government to shore up social security and provide better health care for disabled war veterans. States would be required to use the money towards maintaining vigilance on nursing homes making sure staff and facilities met state standards.

Hernandez has been working on his idea for the last two years and talking about it to anyone who will listen. In that time, he has fleshed it out to the point that he now refers to it as The USA Work Visa Bill.

In his bill, he’s lays out in no-nonsense terms the bill’s conditions: Every undocumented immigrant must get documented, pay for a work visa (he says $20,000), be afforded the opportunity to get a driver’s license that will be marked noting that the driver is an undocumented immigrant and be given English and speech classes.

Hernandez reasons that if this is accomplished it will make the nation more secure because there will be an official count of undocumented immigrants, lessen the chance of racial profiling by law enforcement, increase the quality of immigrant labor with the English classes and finally get their labor paying into social security.

The benefits to the country, according to Hernandez, are the states will share in the revenue generated by undocumented immigrants, the nation will be safer because undocumented immigrants will be recognized and authorities will know who they are, and veteran health care and social security funding will be improved.

After five years, Hernandez envisions undocumented immigrants, who have not broken the law, will receive sponsorship from their state for a green card that can be applied towards full citizenship.

It’s an ambitious idea that Hernandez feels the more who know about it the more who might just agree with him. To that end, he’s created a web site, Citizens for Saving America, that lays out the specifics of the bill and a plea for people to contact their congressmen.

“It’s just a win-win situation for our seniors, our vets and our nation,” declares Hernandez.

Previous Post Report shows Latinos have their own definition of philanthropy
Next PostCalif. Investigates Skin-Lighteners for Dangerous Mercury

Report shows Latinos have their own definition of philanthropy
1 Comment
Calif. Investigates Skin-Lighteners for Dangerous Mercury