Latina Lista: News from the Latinx perspective > Palabra Final > U.S. Gov’t’s Denial of Mexican immigrant’s dying wish to see parents is a form of cruelty unworthy of the US

U.S. Gov’t’s Denial of Mexican immigrant’s dying wish to see parents is a form of cruelty unworthy of the US

LatinaLista — I wonder how much it cost the US government to deny the parents of 26-year-old Maria Sanchez from seeing their daughter as she lay on her deathbed in Houston. 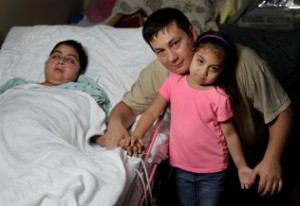 Maria (notice the past tense) was undocumented and had been separated from her parents for the past nine years. Because her father had re-entered the country after being deported to their native Mexico, he was considered a criminal. It was that status that made the U.S. Customs and Border Protection agency deny Maria’s parents, on three separate occasions, “humanitarian parole” to see their dying daughter as she lay dying from an inoperable spinal tumor.

Representatives from U.S. Customs and Border Protection were quoted as saying that “humanitarian parole was an extraordinary measure granted only for a ‘very compelling emergency.'”

Odd that a dying child, regardless of their age, is not a compelling enough emergency to warrant the waiver of standard practice to grant a last wish. However, the government’s refusal to reunite a dying child with her parents falls under immigration enforcement and for that U.S. Customs and Border Protection was doing their job — for which they get paid quite a bit.

According to the Migration Policy Institute’s latest report, IMMIGRATION ENFORCEMENT IN THE UNITED STATES: THE RISE OF A FORMIDABLE MACHINERY, the Obama administration spent more money on immigration enforcement in the last fiscal year than all other federal law enforcement agencies combined.

The report’s authors note that in the 2012 budget year that ended in September the government spent about $18 billion on immigration enforcement programs run by Immigration and Customs Enforcement, the US-Visit program, and Customs and Border Protection, which includes the Border Patrol.

With that kind of investment, it’s obvious these agencies aren’t paid to think or make wise decisions — just enforce a policy that the White House claims is a broken system but is doing everything in its power from injecting any kind of reason or compassion that would make it tolerable until the issue is addressed in Congress.

Maria’s parents will finally get to see her when her husband brings Maria’s body back to Mexico for burial this week.

Seeing her parents would not have saved Maria’s life but it could have eased her pain and that of her parents. To deny her from seeing her parents because someone behind a desk didn’t have the compassion or common sense to make it work makes it imperative that immigration reform be addressed in these next few months in Congress before more money is wasted in the name of immigration enforcement and undocumented immigrants are made yet again the scapegoats of this issue — instead of seen as the victims.

featured, immigrant, Mexico, U.S. Border Customs Enforcement
Previous Post Guatemala youth learn to take control of their environmental future and change the course of their country
Next PostIntrn'l Video: Brazilian ballet school for the blind teaches its students to always look up even if they can't see

Guatemala youth learn to take control of their environmental future and change the course of their country
1 Comment
Intrn'l Video: Brazilian ballet school for the blind teaches its students to always look up even if they can't see