Latina Lista: News from the Latinx perspective > Palabra Final > Politics > Video underscores why Jose Hernandez will always be an astronaut

Video underscores why Jose Hernandez will always be an astronaut

LatinaLista — While everyone was paying attention to the drama happening among the Republican presidential candidates as they went from state to state primaries, the nation, outside of California, mostly missed another political drama. 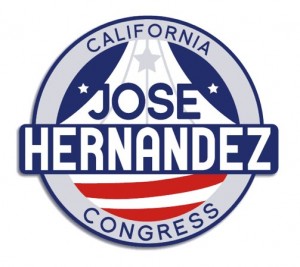 California native Jose Hernandez filed to run for Congress in California’s newly created 10th Congressional District. As most candidates do to show voters why they are qualified to run for public office, Hernandez wanted to list his professional experience — scientist, engineer and astronaut.

Out of the blue (pun intended), Hernandez became the subject of a lawsuit. It seems some people objected that he include his astronaut experience to describe his qualifications to run for office. The suit was filed by a law firm, who by coincidence had worked for his Republican opponent’s campaign at one time and who serve — one of the lawyers named in the suit — as general counsel to the California Republican Party.

The fear that Hernandez including astronaut in his qualifications would give him an advantage is real. A person doesn’t get perceived as being more patriotic than risking his life for his country to fly in space on its behalf.

In the argument to convince the judge that Hernandez shouldn’t be allowed to use the title “astronaut” on the ballot in June, the lawyers said:

“Hernandez’s attempted use of ‘astronaut’ violates the Election Code’s unambiguous requirement that a candidate’s ballot designation reflect one’s current profession, vocation, or one held during the previous calendar year,” the lawsuit states.

Hernandez left NASA in January 2011. One would think that the very smart men who lobbed this ridiculous suit against Hernandez would know that like the title “Doctor”, regardless of whether or not he/she is still practicing, the achievement and distinction of joining such an elite pool of people, warrants the right of any man or woman to cite their experience for as long as they live.

Luckily, on March 29, the court saw through the usual political shenanigans and agreed with Hernandez.

Judge Lloyd Connelly rejected Republican arguments that Hernandez did not work as an astronaut in the year before filing his candidacy and cannot list “astronaut/scientist/engineer” on the ballot as his occupation.

He said Hernandez is an astronaut for “more than the time spent riding a rocket.”

A video has been released that underscores why being a part of that special fraternity ensures life-long membership.