LatinaLista — It’s estimated that 27 million people are victims of child prostitution, forced labor, sex trafficking, domestic servitude and other forms of modern-day slavery. It has become a $32 billion industry worldwide, second only to drug trafficking. 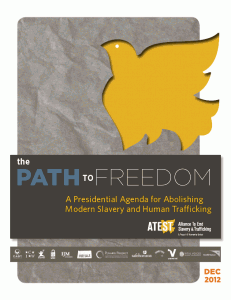 Some countries have renewed their efforts to combat this grossly inhumane for-profit industry. Today, the Alliance to End Slavery and Trafficking (ATEST) wanted to remind President Obama of his September pledge at the Clinton Global Initiative where he vowed to step-up efforts to abolish human trafficking in the United States.

The organization created a road map for the administration by listing 84 detailed recommendations to help the President achieve his pledge. Titled The Path to Freedom: A Presidential Agenda for Abolishing Modern Slavery and Human Trafficking, the report, according to David Abramowitz, vice president for Policy & Government Relations, Humanity United and an ATEST Spokesperson, “is a step-by-step guide for Administration action that will increase protection for human trafficking victims, put more offenders behind bars and improve awareness and prevention efforts.”

Highlights of the recommendations include:

In addition to seeking bipartisan and multinational cooperation, the report’s authors also stress that the administration must also include the voices of survivors.

As survivors of this crime they are one of the best resources to understand how the U.S. government can ensure a victim-centered approach to addressing modern-day slavery and prevent this crime from occurring in the first place.

Survivors should be treated as stakeholders. Survivors are more than just a story; they need to be viewed as important participants in discussions on human trafficking.

Guest Voz: Schools remain active accomplices in treating children of color as criminals rather than students
1 Comment
The Rise of the Private Security Industry in Guatemala