LatinaLista — It’s long been documented that migrant farmworkers are subjected to harsh working conditions — long stints in the sun with no water or bathroom breaks, forced to overwork themselves to fill produce quotas, sexual harassment towards women workers, etc. 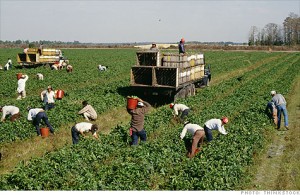 Yet a new study shows that’s not where the dangerous conditions for migrant farm workers end. Researchers from Wake Forest Baptist Medical Center evaluated the cooking and eating facilities in 182 migrant farmworker camps in the eastern part of North Carolina and found violations of eight regulations in at least 10 percent of the camps. The violations ranged from water supply, clean kitchen equipment, sanitation and pest infestation.

The study’s lead author Sara A. Quandt, Ph.D., a professor of epidemiology and prevention at Wake Forest Baptist, said, “Food contamination during storage or preparation, lack of appropriate kitchen facilities, and undercooking can increase the risk of foodborne illnesses. In the long term, absence of safe food storage or cooking facilities can prevent consumption of healthy foods, leading to elevated chronic disease risk.”

The potential to contract foodborne illnesses doesn’t just impact the worker’s productivity but, if severe enough, puts the workers at a greater risk, if they are undocumented, since they won’t be eligible to receive medical attention under the Affordable Care Act.

Studies have shown that workers who don’t have medical coverage and whose paychecks depend on them showing up in the fields to harvest are more likely to work while sick themselves. When handling produce that will make their way to tables across the nation, it’s imperative that these workers are healthy, stay healthy and when sick get the treatment they need — because the health of the nation literally rests in these workers’ hands.