LatinaLista — It has been shown — through public opinion polls and political debates — that the definition of marriage varies from person to person. Some believe it can only be between a man and a woman. Others are open to same-sex marriages.

Regardless of how marriage is defined, the definition of a loving home is constant — a parent or parents who love their children and do everything within their means to provide for the safety, health, education and future of their children. 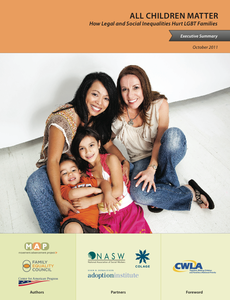 Yet, according to a report released last month, the almost 2 million children of lesbian, gay, bisexual and transgender (LGBT) parents aren’t guaranteed a safe childhood or a secure future. Not because their parents aren’t trying but because of “archaic and discriminatory laws, combined with social stigma, creating obstacles to stable, loving homes; economic security; and health and well-being.”

ALL CHILDREN MATTER: How Legal and Social Inequalities Hurt LGBT Families outlines the specific ways children in LGBT families, along with their parents and those who want to be parents, are denied full rights in a society that prides itself on providing equal opportunities.

If those LGBT parents are Latino, black or immigrants, their denial of rights makes the likelihood of them staying together as a family even harder.

Children being raised in same-sex binational families are denied the protections of family unity under federal immigration law. LGBT Americans cannot sponsor a same-sex spouse or partner for permanent residency or citizenship, a right that heterosexual Americans can exercise.

It doesn’t stop there.

In many states, LGBT adults face restrictions in adoption or fostering–even though roughly 115,000 children are awaiting forever homes.

A child born to (or raised by) two LGBT parents may have one parent deemed a legal stranger by law, threatening to undercut family permanency.

An LGBT parent who is not recognized as a parent by the law can lose custody or visitation rights even in instances when that parent is the most suitable caregiver and has acted as a parent for the child’s entire life.

Because many safety net programs apply antiquated definitions of family, a child with LGBT parents might be denied benefits provided to a peer with heterosexual parents–simply because the child’s parents are LGBT.

Because the federal government fails to recognize LGBT families, such families may be denied critical Social Security death and disability benefits typically provided to heterosexual families.

Many of the challenges LGBT families face stem from a society that assumes that everyone is heterosexual and comes from a family with two married heterosexual parents. The stresses resulting from these expectations are heightened for LGBT families of color, who also have to contend with additional disparities as racial and ethnic minorities. Transgender parents and their children also face added strains.

The report’s authors make several recommendations but one recommendation that would allow LGBT parents the opportunity to start their families on an equal footing with heterosexual families is for states to pass comprehensive parental recognition laws.

In other words, have the law reflect what most people already know — a loving family is a parent or parents who want only the best for their children and do everything in their power to provide that.