LatinaLista — Nobody argues that parenting is hard work, and with all due respect to stay-at-home moms, those moms who find themselves having to return to work after giving birth to provide a decent quality of life for themselves and their children all too often suffer more stress and angst than their stay-at-home counterparts. 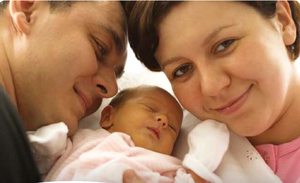 Not having such a guarantee can create a host of stressful scenarios for new parents if bosses get grouchy because new parents are home with the baby, or complications arise with the newborn and more time away from work is needed or parents can’t find suitable child care in time before they have to return to work…the list goes on.

Workers in low-paying jobs — those with the greatest need for both job protection and wage replacement during leave from work — are far less likely to have access to either of these employer-provided benefits. After returning to work, some nursing mothers have legal protections that help them continue to provide breast milk to their children, but others must rely on their employers’ goodwill to be able to pump at work.

As a nation where politicians like to routinely cite US policies as an example for other countries to follow, there is just no comparison between the United States and the rest of the world when it comes to laws that help new parents. Other countries are doing, and have been doing, a better job in this arena for a while. But not all hope is lost for the United States — if examined state-by-state.

A new report released by the National Partnership for Women & Families finds that some states are getting decent grades for helping new parents but too many are getting “Fs.”

Expecting Better: A State-by-State Analysis of Laws That Help New Parents graded every state on their state laws and regulations governing paid leave and workplace rights for new parents.

The conclusion that can be drawn from the report is that there is a lot of room for improvement. The National Partnership for Women & Families says change is possible and even on the horizon:

The Obama administration has proposed a state paid leave fund that would help support states that want to create their own paid leave programs. Some members of Congress who recognize the struggles families face are working on a proposal for a national paid leave insurance program, which would establish a national standard and greatly increase access to paid leave for America’s families.

Yet, paid family leave is an issue that moves very slowly in Washington and state legislatures though data shows the majority of voters support candidates who campaign on such legislation — and more importantly, believe in candidates who deliver.

José Antonio Pantoja: Cuban artist turning brushes into oars of freedom
Comment
The Conundrum: How to get Hispanic GOPers to sell Latino voters an inconvenient message and believe in it