LatinaLista — May 1 is the National Day to Prevent Teen Pregnancy. It’s a day to celebrate the fact that less girls are having unintended pregnancies but also a day to realize that there is still much work to be done among Latina teens. 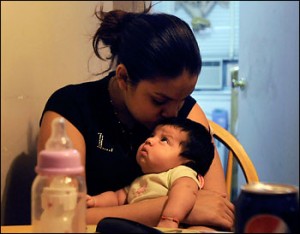 Whether it’s cultural, economic, psychological or hormonal, 44 percent of Latina teens got pregnant at least once before age 20 — nearly twice the national average, in 2010. And if that wasn’t enough, Latina teens are the second highest group to have repeat births.

Given the attention to the Latina teen birth rate, difficulties in the economy and the knowledge about the importance of an education, many in the Latino community wish Latina and Latino teens received accurate sex education in school.

According to a poll released last month asking Latinos about their feelings about teen pregnancies:

Yet, for too many students across the country, their school systems aren’t ready or equipped to share the kind of information Latina teens so desperately need. So, during this month, the National Campaign to Prevent Teen and Unplanned Pregnancy, along with their media partners, are affording teens and their parents the access they need to information and the opportunity to discuss the issue with their friends and family.

It’s up to these parents and their children to take advantage of the opportunity.

The following is a list of special media events taking place in the month of May to jumpstart the conversation about teen births.

Tune in to TeenNick on May 1 at 4PM ET for a block of “Degrassi” episodes exploring how different characters handle the consequences of sex. Look for StayTeen PSAs on TeenNick today and all month long. If you miss today’s special programming block, watch the episodes online, comment, and learn more.

Tr3s–MTV’s channel celebrating Latino culture, music and artists—will focus on teen pregnancy prevention throughout May with special posts on Blogamole, online videos, and more. Be sure to watch hit series Ultimo Año Monday through Friday at 6pm ET or online any time and find out how this close circle of friends deals with sex, relationships, and pregnancy in their final year of high school.

Look out for StayTeen PSAs on Fox during your favorite shows throughout the month of May.

Family Circle’s newly re-launched blog, Momster.com, will highlight what parents can do to help their teens avoid pregnancy.

MTV will be updating the 14 million+ fans of their 16 and Pregnant, Teen Mom, and Teen Mom 2 Facebook pages with links to the quiz.

Seventeen will be blogging about the National Day for their teen readers and promoting the quiz on their Twitter feed.
ABC Family’s Secret Life of the American Teenager site will feature a blog post and links to the quiz.