LatinaLista — Not being able to read is a blow to anyone’s self-esteem. It’s been known to be a huge factor among school dropouts but until now no one has documented how low literacy rates may be one of the underlying causes for teenage pregnancies too. 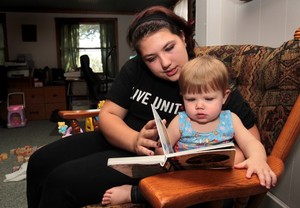 In the study by the University of Pennsylvania and described to be the first of its kind, and released this week at the American Public Health Association’s 140th Annual Meeting in San Francisco, researchers found:

In evaluating the data, the researchers couldn’t help but notice that African American girls and Latinas were overrepresented among girls who had below-average reading skills. The fact that teenage births are more likely to happen between these two groups of girls raised a red flag to researchers who also found:

While factors determining the likelihood of any teenage girl getting pregnant has always been thought to deal more with poverty, abuse and peer pressure, among other factors, this study highlights a reason that,until now, has never been fully acknowledged. Though poor literacy has been known to be a factor in most cases, but not all because even honor roll students have gotten pregnant, it’s never been singled out like this before.

This study is encouraging because it gives advocates, schools and communities a concrete starting point on where to begin to improve the odds for these girls who only want to succeed at something in their lives. Having a baby lets them receive the kind of love and attention that they can’t get in school but will get from someone who won’t judge them — or even care if they know how to read or not.