LatinaLista — The gains made by Latinos since the Civil Rights era have been numerous. They have been achieved in areas such as voting and property rights, access to education and healthcare, etc. None of these gains could have been made without the help and voice of Latino advocacy organizations.

The role these organizations have played in heightening awareness among politicians on the local, state and national levels is indisputable. One organization, the League of United Latin American Citizens, otherwise better known as LULAC, recently wrapped up their national convention for this year. In the following post, LULAC’s executive director, Brent Wilkes, explains the next phase for the organization and how it is meeting the evolving needs of Latinos.

After more than 80 years of national conventions, the needs of the League of United Latin American Citizens (LULAC) have evolved. Two of the most pressing themes addressed at the 82nd Annual National LULAC Convention held in Cincinnati last week were immigration and health care. 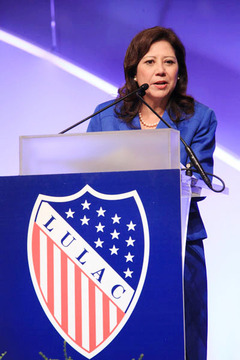 In addition to the former President of Mexico, Vicente Fox, who spoke passionately about border issues and immigration, our convention was graced with two of the highest ranking females in the Obama administration.

It was refreshing to hear the sentiments of Secretary of Labor, Hilda Solis, and Secretary of Health and Human Services (HHS), Kathleen Sebelius. Both received standing ovations from LULAC’s attendees, and it’s important to note that LULAC, the largest and oldest Hispanic Organization with 900 councils in the United States and Puerto Rico, is a non-partisan entity.

Secretary Solis echoed LULAC’s stand as she spoke about the practice of employment of undocumented workers in this country. She highlighted how our laws are designed to protect all workers, and recognized that when any of our workers are vulnerable, it harms us all.

“We should not use them as scapegoats,” she said, referring to undocumented workers. “If we brought them from another country, you shouldn’t treat them as slave labor. Our country prides itself on welcoming immigrants. That’s the premise of who we are.”

In fact, Cincinnati was selected as the venue for the 82nd annual convention, in part, because this city of immigrants, a key stop on the Underground Railroad, is now home to 125,000 Latinos.

As Secretary Solis was at the conference discussing the rights of immigrants, Senator Dick Durbin began hearings on the DREAM Act, which LULAC has unwaveringly supported. Our country historically has welcomed the tired and the poor. This indeed is part of what makes the United States so great, and one reason why people have always wanted to call it home.

LULAC believes it is un-American to punish our youth who excel in school or serve selflessly in our military. Likewise, Secretary Solis, in one of her comments at the LULAC convention, supported our claim saying, “some of the DREAMERS are our best and brightest…it doesn’t make sense to break up families…we know we can do better. There’s no doubt in my mind the system is broken.”

LULAC believes our nation urgently needs to correct the broken system through an effective and practical immigration system that will reflect the best of America’s values. LULAC supports a reform that will reduce the backlog of individuals seeking residency or citizenship and restructure the naturalization process in a manner that is streamlined, consistent, fair, and equitable for those seeking U.S. Citizenship.

In the meantime, our organization recognizes there are serious health challenges facing our community including a dramatic increase in diabetes, obesity, heart ailments and other diseases that are often driven by sedentary lifestyles, obesity, poor nutrition, inadequate level of immunizations, and lack of quality and affordable health care.

These problems, if not treated properly, can lead to painful diabetic neuropathy and amputations, renal failure and of course heart attacks and strokes.

Studies suggest that lack of health insurance, language, and citizenship are key barriers that prevent many Hispanics from accessing health services and from receiving quality medical care. Due to many factors, Hispanics have the highest uninsured rates of any racial or ethnic group in the United States.

Secretary Sebelius acknowledged those challenges which LULAC understands are crucial to the well being of our community and our nation.

“By far the biggest step we’ve taken to address health care disparities was the Affordable Care Act,” stressed Sebelius. She emphasized that the reform focuses on “better health, better care and lowering costs through improvement. Too many don’t (currently) get screenings due to lack of access.”

To help close the gap, Sebelius announced, HHS for the first time is initiating a promotora program designed to set up framework and training. Promotoras, or community health workers, have long had positive results in border and migrant communities. This is one system that we know works, yet until now, never embraced by our national health care networks. “We need to start by giving every American a chance to live a healthy life,” continued Sebelius. 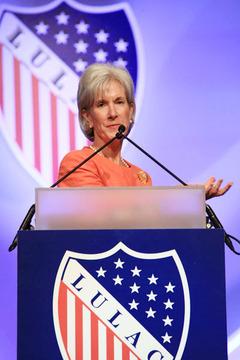 Similarly, LULAC is committed to improving health among the U.S. Hispanic population. One initiative discussed at the convention, Latinos Living Healthy, is aimed at reducing childhood obesity by facilitating access to nutrition information, foods that are healthy and affordable and access to safe spaces to engage in physical exercise.

We know how to make a difference. It’s just about ensuring that the systems are in place and our community is welcomed and made aware of them.

Brent Wilkes is the national executive director of the League of United Latin American Citizens (LULAC).