How air pollution harms your body 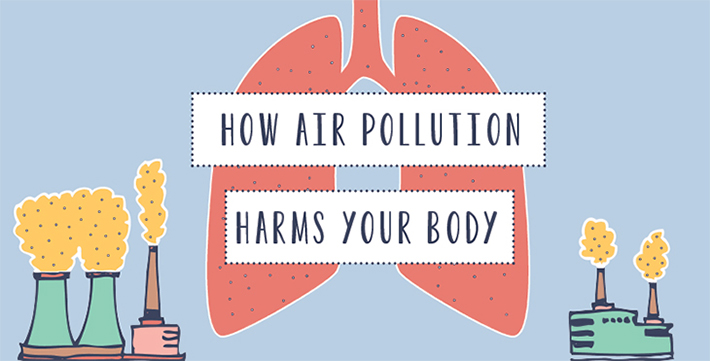 Air pollution can cause serious health problems. Rarely, it can even kill people — and we’re not exaggerating. That’s why we care so much about the laws that protect us from air pollution.

Read on to learn more about the specific parts of our bodies that are affected by air pollution.

Air pollution can be made of tiny particles or gases, and these get into your body when you breathe. Different types of air pollution do different things inside your body. Air pollution can directly irritate the eyes, nose, and throat, before it even gets into the lungs. It can cause runny nose, itchy eyes, and scratchy throat.

When you breathe in, air moves through your nose or mouth, down your throat into your trachea, and then into your lungs. Pollution can irritate the airways. When that happens, muscles around the bronchi get tight; the lining of the bronchi swell; and the bronchi produce excess mucous. When the airways are constricted, it becomes hard to breathe. That’s what happens during an asthma attack.

Air pollution makes infections worse and makes the lungs more susceptible to getting infections in the first place. Pollution causes your airways to narrow, decreasing airflow, and amps up the production of mucous. It also may prevent the lungs from effectively filtering bacteria and viruses.

Some air pollution causes lung cancer. Diesel exhaust, from trucks and cars, is a known human carcinogen. Some pollutants are gases. They come into the lungs easily, just like oxygen in the air. These gases pass directly from the alveoli in the lungs into the blood stream, just like oxygen does.

Air pollution gets into your blood and affects your heart. Air pollution can cause changes in the system that controls how your heart beats. This can cause the heartbeat to become irregular (an arrhythmia).

A narrowing in the blood vessels of the heart from cholesterol is called plaque. When the heartbeat becomes irregular, that can cause plaque to break off the wall of the blood vessel and block blood flow. This causes a heart attack.

When air pollution passes from your lungs into your blood, it can also cause inflammation throughout your body. Being in a state of systemic inflammation causes the blood vessels to become narrow. This decreases blood flow. The inflammation can also loosen plaque in the circulatory system or cause a blood clot to form — both of which can trigger a heart attack.

Air pollution can harm your brain. In the brain, decreasing blood flow, loosening plaque, or triggering a blood clot causes a stroke.

Air pollution can have other impacts on the brain. When pollution gets into the bloodstream, it goes to the brain, too. There, it can cause headaches and anxiety and affect the central nervous system.

Over the long term, some kinds of pollution can lead to reduced IQ, reduced attention, and behavioral problems.

Another possible result of breathing in air pollution is an increased risk of dementia. Although the link between air pollution and dementia is uncertain, it may be a result of tiny particles triggering systemic inflammation. Tiny particles may also harm the brain directly, by entering the sensitive organ through the nose and eyes.

Air pollution gets into your baby. Air pollution can increase the risk of preterm birth and low-birth-weight babies.

When air pollution passes from the lungs into the blood, it can cause systemic inflammation throughout the body. This stressor may trigger labor or interfere with normal development of the baby.

When a pregnant woman breathes tiny particles of air pollution, her baby may be more likely to develop autism. Although the link between air pollution and autism is uncertain, it may be a result of systemic inflammation, which in turn may interfere with normal development of the baby’s brain.

CHILDREN AND THE ELDERLY

And the elderly are vulnerable too. As people age, their bodies are less able to compensate for the effects of pollution. The elderly are more likely to have other diseases and conditions, such as heart disease or emphysema, that can be aggravated by air pollution.