Voces Verdes, Presente, the National Hispanic Medical Association, their allies and members applauded the Environmental Protection Agency’s and Obama Administration’s release of a proposal to limit industrial carbon pollution from new power plants, which is critical to protecting public health. 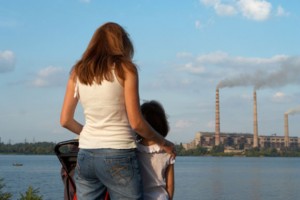 “Power plants release more than two billion tons of dangerous carbon pollution and other pollutants into the air every year. This new standard announced by the Obama Administration and the EPA will establish the first national limits on carbon pollution from new power plants and move our country forward toward protecting public health, particularly children’s health, from the harmful effects of climate change, including air pollution,” said Dr. Elena Rios, President of the National Hispanic Medical Association (NHMA). “As doctors, nurses, and health professionals, we know that carbon pollution is particularly dangerous for children because it makes smog pollution worse, which triggers asthma attacks and permanently damages and reduces the function of children’s lungs.”

Latino organizations are showing their support for the new carbon rules recognizing that EPA is doing its job under the Clean Air Act — and holding power plants accountable for the amount of pollution they spew into the air.

“This new rule to limit industrial carbon pollution from power plants, like the recently issued clean car standards, will cut carbon pollution and will help spur innovation and create jobs,” says Guillermo Garcia of Voces Verdes. “In both of these cases, the new technologies necessary to make reductions in harmful carbon pollution will encourage innovation leading to clean technology manufacturing jobs.”

“As the nation’s largest online Latino advocacy group, Presente is very pleased that EPA has announced these new standards to protect our health by limiting carbon pollution that causes global warming,” said Arturo Carmona, Executive Director of Presente. “This is a critical issue for Latino communities who will feel the impacts of climate change closely and directly whether from worsening smog, harsher summers, or worsening drought.” Carmona added, “Presente will be active in bringing Latino voices to weigh in on the importance of this standard in the weeks to come.”

The standard will limit carbon pollution from new power plants. While existing power plants are not covered by this standard the Clean Air Act requires EPA to follow up with requirements for those sources too and the proposal today acknowledges this responsibility. We support EPA completing the standard for new sources and developing standards for existing sources.