Reminders of Death and Religious Belief

By Tom Rees
This View of Life

There’s quite a lot of research showing that subtly reminding people of death can make them more religious. But what’s not clear is why that should be—and in particular, whether nonreligious people also become more religious.

Jonathan Jong, a new doctoral graduate from the University of Otago in New Zealand, has conducted a series of fascinating studies to investigate just this. You can find his thesis here. There’s a lot in it, but here’s two key studies that will make you think.

In the first study, Jong asked students to write either about what they thought would happen to them when they die (the death condition) or about watching TV (the control condition). Then he asked them a series of questions about religious beliefs (with a Christian slant)—the Spiritual Belief Scale.

You can see in the figure below that religious people have, as you would expect, high levels of belief in the supernatural—and this increases still further in the “death” condition versus the TV condition. 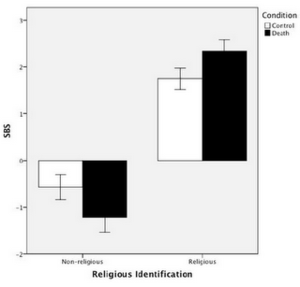 Nonreligious people had lower beliefs to start with, and they got lower still after death reminders. They become stronger in their rejection of religious beliefs.

OK, so far so good. But this is just what people are saying—and what people say and what they think instinctively are not necessarily the same.

Then Jong ran a version of the Implicit Association Test. This is basically a computerised quiz in which you have to classify words into different groups. Some classifications go against your instinctive beliefs—and these classifications will make you stumble a little, and so take you a little bit longer.

So, in this case, the subjects had to classify supernatural (angel, devil, God, heaven, soul, etc.), real (eagle, helicopter), and imaginary (Batmobile, fairy, genie, mermaid, Narnia) entities as either real or imaginary. For the nonreligious, being asked to classify supernatural and real objects together as real, and distinct from imaginary objects, is tough to do. It goes against their instincts, and so they took significantly longer to do it.