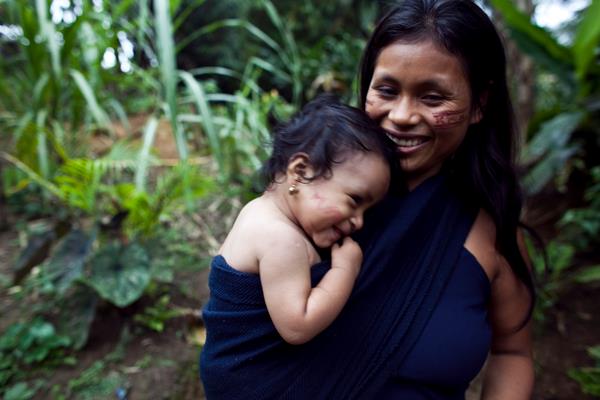 It’s 6:00 am in Ecuador. As the first hints of sunlight appear over a Kichwa village in Napo Province, the women, men, and children of that village begin to gather around the communal fire to enjoy hot gourds of guayusa, a traditional brewed leaf drink full of caffeine and antioxidants.

The village elders share stories, mothers prepare their children for bathing, and the village shaman plays music and interprets dreams from the previous night. Together, the community awakens and prepares for the day.

Approximately 3000 miles northeast, it is 7:00 am in New York City, where a businesswoman sleepily pulls back the covers and readies herself for a day of work. Before dashing out the door she grabs a bottle of iced guayusa, counting on its high caffeine content to give her enough focus and energy for a busy day. People on different continents, leading different lives, sharing a common experience – this is the vision of Runa Tea.

Runa Tea was founded in 2009 by recent college grads Tyler Gage and Dan MacCombie, who shared the idea that the natural treasures of the Amazon could be enjoyed around the world while still protecting the rainforest and respecting the lives of its indigenous residents.

The two fell in love with guayusa and the Kichwa while studying in Ecuador during their undergraduate careers at Brown University. Guayusa, a leafy plant that is closely related to yerba mate, contains as much caffeine as a cup of coffee, twice as many antioxidants as green tea, and a variety of different compounds known to aid in weight loss, calm the nervous system, promote cardiovascular and brain health, and have anti-cancer and anti-inflammatory effects.

Guayusa also contains theobromine, the same substance found in dark chocolate that gives you a “warm-fuzzy” feeling – combined with the caffeine, this gives you a boost of energy without the jitters or crash that often accompany coffee.

Gage and MacCombie identified both environmental and economic problems that they saw in Ecuador. Deforestation occurs at a rate of 3 percent per year, with much higher rates of undocumented degradation resulting from extractive industries and selective logging and hunting.

Local farmers were dependent on a limited amount of cash crops, subject to volatile market prices, and had to rely on middlemen to compete on the local market. Many youth ended up migrating to the cities for better income opportunities, eventually losing touch with their communities and traditional culture.

Wanting to introduce guayusa to the global market while remaining true to their philanthropic roots, Gage and MacCombie created a hybrid company. Known collectively as the Runa Group, Runa LLC operates as a for-profit business, handling the production and marketing of the guayusa beverages, while Fundacion Runa, the non-profit branch, works directly with farming communities in Ecuador, focusing on social empowerment, community development, and environmental management.

Runa sources directly from farmers, purchasing over $120,000 worth of guayusa leaves each year, resulting in an average increase in income of 30 percent for each farming family. Runa plants over 150,000 guayusa plants a year in these communities and also funds $20,000 per year to participating communities that is used by local leaders for community development projects.

Aside from promoting economic growth in Ecuador, Runa is expanding within the United States – they reach an average of 15,000 new potential customers each month and are expected to sell US $1 million worth of product this year.

The farmers that Runa works with are primarily Kichwa, the largest of the eight indigenous groups in the Ecuadorian Amazon. There are between 60,000 and 100,000 in Ecuador, organized into roughly 450 different communities.

The Kichwa practice hunting and fishing, but their primary livelihood comes from subsistence farming. The Kichwa use traditional chacras, diverse gardens planted right in the forest, making guayusa production an appropriate and non-destructive new source of income for them.

Guayusa must be planted in forest shade for the leaves to develop properly, and is planted alongside endangered hardwood trees, cacao, coffee, and local food crops. Runa currently supports 2,000 farming families and employs 40 people in both New York City and Ecuador.

Guayusa is important to the Kichwa in both a traditional and mythical way. Guayusa helps people be “runa,” fully alive, and is also known within the Kichwa community as the plant that first taught humans how to dream. Runa Tea has successfully integrated entrepreneurship with philanthropy, an eye for business with a respect for indigenous culture.