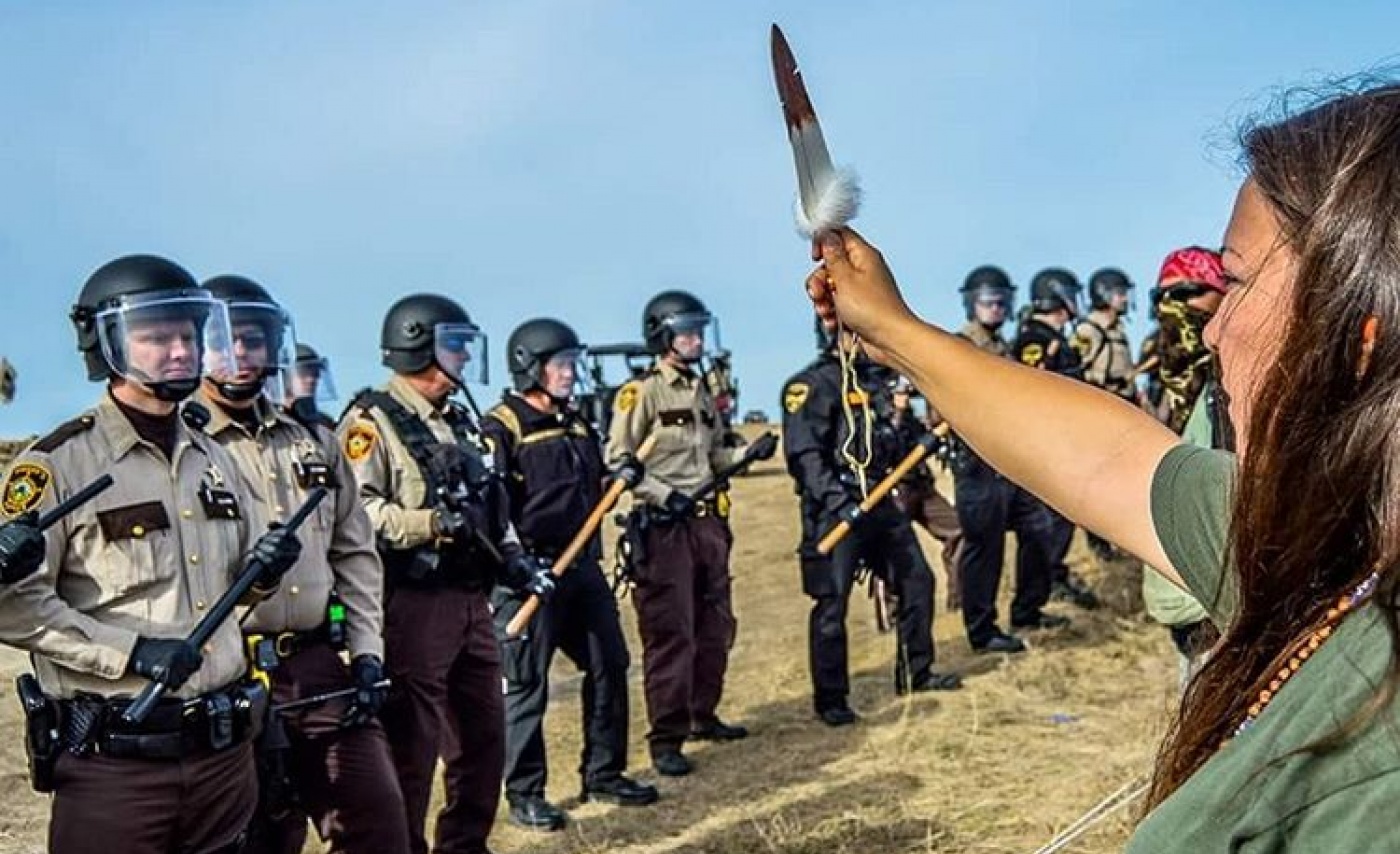 Since April 2016, the Standing Rock Sioux Tribe has been opposing the Dakota Access Pipeline. This movement aimed at protecting the right to clean drinking water for all has escalated as militarized police forces have started using excessive force.

More Indigenous and non-Indigenous groups have expressed their solidarity and support. The movement, spearheaded by the Standing Rock Sioux Tribe, was granted an injunction due to the involvement of the federal government, but the protectors are waiting for further and more comprehensive action while Energy Transfer Partners (ETP), the company behind the pipeline, continues building.

“[The protectors] are there to stop the pipeline,” Cherokee writer and activist Adrienne Keene wrote in response to increased violence and political silence, “but to do it in prayer and without weapons. They are there to fight for the recognition of the rights and presence of the Standing Rock Sioux [Tribe], and to fight for the water and land. But this is not just a fight for the environment, and I want you to remember that. This is another battle in the ongoing resistance to settler colonialism.”

Early in September, ETP started clearing land about two miles north of the confluence of the Cannon Ball and Missouri Rivers, at the shores of Lake Oahe. This is land that lies outside of the contemporary borders of the reservation, but is sacred land that contains spiritually and culturally significant sites.

David Archambault II, the tribal chairman of the Standing Rock Sioux Tribe, said “this demolition is devastating. These grounds are the resting places of our ancestors. In one day, our sacred land has been turned into hollow ground.”

On September 4, the protectors at the destroyed site were attacked by violent private guards hired by ETP, who used pepper spray and riled their dogs to attack several protectors. The high-profile arrest of actress Shailene Woodley on the 10th of October and her statementcondemning white indifference increased the awareness of the hostile police.

On the 22nd of October many protectors reclaimed tribal land outlined in the Fort Laramie Treaties of 1851 and 1863 in response to a mass arrest of 127 Indigenous and non-Indigenous protestors. On the 27th of October the people on the Treaty land were confronted with a heavy militarized police leading to the arrest of 141 people. The violence enacted by the police force from five different states armed with riot gear, sound cannons, rubber bullets, and armored vehicles included the destruction of a teepee, the confiscation of several sacred items, varying degrees of injuries of the protectors, imprisoning protesters in dog kennels as well as the death of a horse.

Since then, the Morton County Police Department, which administers the Treaty lands, posted online that it charged Red Fawn Fallis with attempted murder as allegedly she shot at officers, the first aggravated yet uncorroborated charge against a protector. Additionally ETP also used tactics of infiltration, of paid security guards pretending to be violent protesters and catalyze the conflict.

Meanwhile, David Archambault II is calling on the Department of Justice to hold to ETP and the State accountable for its excessive violence and its consequences.

The most recent confrontation occurred on the 2nd of November as Morton County Police forces fired non-lethal bullets at protectors aiming to defend the sacred burial site of Alma Perkin and Matilda Gain, as well as other sites and artifacts on land ETP is currently constructing the pipeline on.

This stand-off took place in a creek and led to the destruction of a makeshift bridge built in order to reach these sacred places. Members of the North Dakota Public Service Commission, which is the body that issued the pipeline building licences, are expressing that ETP is failing to uphold their agreement in regards to respecting and reporting finding sites and artifacts.

The Standing Rock Sioux Tribe is receiving support from over two hundred Indigenous Nations, indicating the scale and unity of the movement. The Standing Rock Sioux Tribe list of supporters includes endorsements from Tribal governments across the United States, such as the Navajo, Salish, Maliseet, Choctaw, and every Sioux Nation, as well as Indigenous peoples from around the world such as the Sámi, Māori, Maya, and Sheguiandah.

The unifying force of this movement, which continues to grow, is connecting environmental protectors from all walks of life and nationalities to come together in unprecedented ways, and while the focus on stopping the DAPL is not lost among those on site in North Dakota, the movement is transcending its local cause.

Additionally many non-native groups and individuals, such as the previously mentioned Shailene Woodley, have come out in active support of the #noDAPL movement. The support is also coming from other marginalized communities across the United States and the world, ranging from Jesse Jackson declaring this one of the clearest examples of environmental racism the United States has seen in a long time to American Muslims from MPower Change explaining the significance of water in Islam and the need to support one another in its protection.

In the final days of October, this solidarity has become visible in over a million people checking in on Facebook at the Standing Rock Sioux Tribe to show support and flood the information flow to the police department, as well as protests and sit-ins at Wells Fargo, CitiBank, and TD Bank locations around the country to protest the loans these institutions provided to ETP. The most recent of these protests resulted in the temporary shut down of Grand Central Station before the protesters moved to the locations of the complicit banks.

The United Nations issued  a statement to call “on the government of the United States to comply with the provisions recognized in the United Nations Declaration on the Rights of Indigenous Peoples and ensure the right of the Sioux to participate in decision-making, considering that the construction of this pipeline will affect their rights, lives and territory,”

This powerful statement validates the cause and its struggle, and provides unprecedented global political visibility. Additionally, Amnesty International stated in response to the escalation of violence that it would act as an independent monitoring body of the situation to ensure the safety and rights of the protectors.

The Departments of Justice, Army and Interior issued a temporary halt on the construction of the Dakota Access Pipeline on September 9th, 2016. This decision came after a prolonged silence from the federal government on this issue, for which president Obama has been much criticized by Indigenous and non-Indigenous activists.

On September 7th, in an amazing display of global solidarity, a Malaysian woman confronted president Obama on the #NoDAPL movement during a town hall in Luang Prabang, Laos. He evaded a direct answer by expressing a commitment to the lives and rights of Indigenous peoples. Although it is disputed to what extent president Obama has influenced the order, it does mark a turning point in the movement and an opportunity for the Standing Rock Sioux Tribe’s objections to be heard by the governing bodies.

As ETP continues construction and tension mounts, Indigenous protectors are turning yet again to President Obama for federal action. “It is time you stop this desecration of our sacred sites,” Chief Arvol Looking Horse directed to Obama as he asked him to act now for the sake of the rights of Indigenous peoples and the environment.

On November first, President Obama released a statement saying that “We’re going to let it play out for several more weeks and determine whether or not this can be resolved in a way that I think is properly attentive to the traditions of First Americans.” It is unclear if this means rerouting the pipeline or halting the project altogether.

Equally significant are the responses of the two major candidates currently running for president. The Republican candidate, Donald J. Trump has remained silent on the issue, yet recent financial disclosures show the Republican nominee is financially complicit as Trump has invested money in the construction of the Dakota Access Pipeline.

The Democratic nominee, Hillary Rodham Clinton, released a statement following the escalated incidents of October 27th in which she stresses the inclusion of all voices in infrastructure projects as well as the right of protesters to protests and of laborers to work in safety. The ambiguous statement was followed by protest of Standing Rock Sioux Tribe youth setting up a teepee in Clinton’s main office in New York City to deliver a letter asking for support. The Democratic nominee was not present at the time, yet none of her aides accepted the letter. The protest ended as police threatened with arrest if the protesters would not leave.

While the temporary hold created some space for conversation between the Standing Rock Sioux Tribe, the federal government and Energy Transfer Partners, what it actually means to the future of the pipeline is uncertain. The hold does not apply to the entirety of the pipeline but rather the land immediately surrounding and underneath Lake Oahe, near the confluence of the Missouri and Cannon Ball rivers.

Wakíƞyaƞ Waánataƞ, in an official statement from the activist encampment Sacred Stone Camp, said that “we have seen time and time again, a consistent strategy from the State in these situations: string out the process, break it to us gradually to avoid a big confrontation, present the illusion of careful, thoughtful review of the case, tempt us with promises of modest reforms, but then in the end make the same decision that serves money not people. […] We are not leaving until this is over.”

Waánataƞ’s statement proved correct, as ETP continued construction encroaching on territory included in and thus defying the injunction issued on the 19th of September by the Federal Appeals Courts, which officially haltedthe construction of the pipeline within 20 miles on either side of Lake Oahe. The Energy Transfer Partners stated in an internal memo released on the 13th of September that the company remains committed to finishing the pipeline and urges its employees to not engage with the movement and continue the work within the confines of the law.

On the 29th of October Chief Arvol Looking Horse and Standing Rock elder Archie Fool Bear attempted a peaceful negotiation with the Morton County Police Department and ETP, but unfortunately it was to no avail. “The fight’s not over,” Fool Bear vowed afterwards.

The #NoDAPL movement continues to grow and fight for a cause Cultural Survival fully stands behind and will continue to report on. The incredibly diverse Indigenous movement present in Cannon Ball is increasing the visibility of Indigenous activists, issues, and stories.

Weahkee attest to how this movement is a renewed call echoing a long history of activism. Frank White Bull, a member of the Standing Rock Sioux Tribal Council, illustrates the power of the movement when he said “we made our stance, and the Indian Nation heard us. It’s making us whole. It’s making us wanyi oyate — one nation. We’re not alone.”

Guest Voz: U.S. voters need only look south of the border to see what happens when "unfit" people are elected to office
Comment
The fear election