For the past three weeks Juan Rodriguez has been living in complete darkness. Not because he can’t afford to pay his electricity bill, but because this CEO is refusing to turn his lights back on until he has raised $50,000 for hundreds of thousands of Guatemalans who do not have access to electricity. 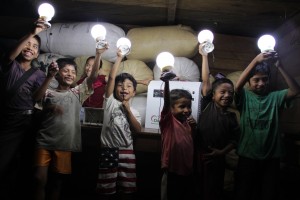 Approximately 2.6 million people in the Central American nation live in remote locations where the traditional grid system is yet to arrive. When the sun goes down they turn to kerosene and candle light – expensive alternatives that can lead to serious health problems.

Earlier this year, two toddlers in the north of the country were killed when the bed they were sleeping in caught fire from a nearby burning candle. Avoidable accidents like this occur far too often among poor families, which is why Rodriguez’s solar power company, Quetsol, has developed a new way to transmit affordable electricity to some of Guatemala’s poorest, and most isolated, people.

Since it was founded in 2010, Quetsol has distributed over 3,000 solar power kits throughout Guatemala. Its current model supplies a small home with up to six hours of light each night, allowing children to continue studying and parents to continue working.

However, over the next five years the company hopes to reach 100,000 homes with its new pay-as-you-go system, which cuts out banks and puts people in charge of their own accounts – enabling them to generate their own electricity via a single cell phone payment.

“The total cost of buying candles and walking to the nearest town to pay for charging a cell phone is 130 quetzales (US$17) per month. Our solution will cut this cost to 90 quetzales (US$11) a month, empowering families to sustainably develop,” says the Guatemalan-born CEO.

So far Rodriguez’s campaign on the crowd-funding site, indiegogo, has raised $30,000 – over 50 percent of the money needed to launch his company’s latest model.

“The support of everyone has been the light in my dark room, and the goal [$50,000] has kept me motivated. I was very anxious before I entered, but now I can honestly say it has been one of the best experiences of my life. My patience levels have exceeded my expectations. In general, I just feel more awake, as if a part of my brain that was asleep is now alive,” says Rodriguez.

The Guatemalan got the idea for the campaign from a man he met who had developed a therapy called Darkness Retreats. Following on from that initial meeting, Rodriguez gave a speech in Colorado last year about Quetsol where he turned the theatre lights off so that his audience could get a better understanding of how it feels to live without electricity.

Rodriguez started the challenge on February 18 in a sound- and light-proof recording studio, but had to move after 14 days: “I was inhaling all the fibers from the fiber glass walls, which can be very damaging, so we completely darkened my room, with black sheets covering the windows.”

Although he has no access to light and electrical appliances, the Quetsol CEO still uses his cell phone and laptop so that he can run his company and push the campaign. During the day he hosts interactive sessions using a webcam where he chats with followers and plays song requests for $100.

“We want to be more than just one little solar company trying to raise money. We want to be a part of a new generation of utility companies that support rural development and protect the environment at the same time,” says Rodriguez.

Guatemala, impoverished, indiegogo, solar energy
Previous Post Environment: Getting the world to agree which species need protection
Next PostLatina entrepreneur on a mission to eradicate term 'Hispanic' from American lexicon

Environment: Getting the world to agree which species need protection
Comment
Latina entrepreneur on a mission to eradicate term 'Hispanic' from American lexicon