Every month, doctors in the United States make another 1000 cervical cancer diagnoses, totaling 12,000 diagnoses every year. This month happens to be Cervical Cancer Awareness Month, presenting us with an opportunity to reflect on this often deadly, and yet almost completely preventable, disease.

What’s missing from the national discourse? 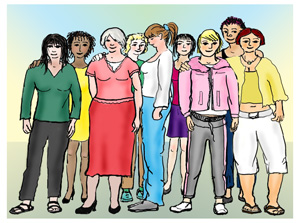 As advocates, doctors and educators highlight the need to prevent cervical cancer, many will forget a critical piece of the puzzle: the experiences and needs of transgender and gender non-conforming individuals, a population who is marginalized not only in society but particularly in health care settings and service delivery.

As an organization dedicated to advancing reproductive health at the intersection of race, ethnicity, class, gender, sexual orientation and immigration status, we believe the problem begins with a lack of both comprehensive and disaggregated data.

For example, we know that lesbian and bisexual women have an increased chance of suffering from cervical cancer because they often cannot access appropriate preventive screenings due to fear of discrimination and other systemic health care issues.

We also know that Latinas have the highest rate of incidence of cervical cancer and the second highest rate of mortality, after Black women. However, there is little data on the health of trans and gender non-conforming individuals, let alone Latino/a persons or other subpopulations within this community.

The data we do have is concerning.

One reason for this is the high rates of job discrimination that LGBTQ individuals face. The National Transgender Discrimination Survey (NTDS) found that 26% of Latino/a transgender individuals were terminated from their jobs because of bias and 47% were not hired due to bias. The same survey found that 28% of Latino/a transgender individuals live in poverty. Lack of employment security, often coupled with poverty, can lead to sporadic, if not, non-existent access to health insurance.

Another barrier to accessing health care for Latino/a trans and gender non-conforming persons is the discrimination and violence these individuals face in health care settings. The NTDS found that 23% of Latino/a transgender respondents had been refused medical care due to bias, and 36% reported having postponed care when they were sick or injured due to fear of discrimination.

Additionally, there have been reports that undocumented, transgender persons are at an increased risk for physical attack in doctors’ offices, hospitals, and emergency rooms.

Consequently, it should not surprise us that Latino/a trans and gender non-conforming people cannot gain access to reproductive health care given the tremendous barriers these populations face in accessing any form of health care at all.

According to the National Center for Transgender Equality, 48% of transgender men have delayed or avoided preventive services such as pelvic exams or STI screenings due to discrimination or disrespect. Another study demonstrated that one reason trans men did not seek these services was discomfort due to gender issues.

Sadly, trans and gender non-conforming patients cannot even trust that providers will have the appropriate knowledge needed to serve them: in one survey, 50% of transgender people reported having to teach their providers about providing appropriate health care.

The picture is bleak, but there is something we can do.

It is time that reproductive health and rights advocates, providers, and researchers acknowledge the distinct barriers that transgender and gender non-conforming persons face to obtaining the health care they need. As movements based in social justice and health equity, we must center the needs and elevate the voices of our trans and gender non-conforming sisters and brothers, particularly those who are people of color.

We can begin with a more inclusive and respectful conversation about cervical cancer prevention and other reproductive health care, and then work to bridge the reproductive justice movement with the LGBTQ movement to ensure bodily autonomy, health, dignity and justicia for all our communities.

Viernes Video: Sundance film creates a stir about immigration and plight of migrants
Comment
Secrets to Longevity: The Last 10 Pounds