LatinaLista — Hugely disappointing news was released this week regarding just how much the Latino community has suffered from this recession — a drop of 66 percent in household wealth.

For too many Latinos, debt has become a way of life. Not because Latinos are big spenders but more because of economic circumstances and because they’ve become easy victims of predatory lenders. 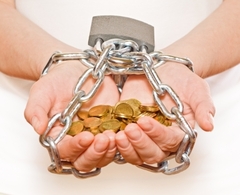 The worst of these lenders is payday and auto title loan businesses. Latinos in desperate need of cash to pay utility bills, rent, groceries, gas, medical emergencies, etc. are going to these payday lenders and getting loans to help make ends meet until they get a paycheck. According to policy studies, loan amounts aren’t that big. Most are $500 or less and for most anyone such an amount should be easy enough to pay back. Yet, not so in an industry that makes its profits charging absurd interest rates.

In the end, the payback amount is so grossly inflated that it locks too many vulnerable people into a cycle of debt.

Policy analyst Ann Baddour has extensively studied the payday and auto title lending industry and cautions that without much needed reform, Latinos, blacks and single mothers will continue to be victimized by an industry run on greed.

At a recent legislative hearing in Texas, a lobbyist representing payday and auto title loan businesses testified that 392 percent interest is “too low” for the industry.

This testimony came on the heels of an outpouring of voices from cities, churches, nonprofits, and individuals citing abusive practices and calling for fair consumer credit standards.

Local charities saw nearly 20 percent of their cash assistance go to families in crisis resulting from payday and auto title loans. As a Dallas minister noted, “If someone is drowning, instead of throwing them a life preserver, in too many instances, we have thrown them shackles. That is what the payday industry has done to too many individuals.”

A market where families are “thrown shackles” while at the same time businesses assert that outrageous rates are not enough is broken and needs reform.

Yet, in the end, the state took no action to curb excessive rates or the damaging cycle of debt though the need for reform was affirmed again and again through hours of public testimony.

The Texas story is not unique. Though a growing group of states has adopted rate caps and regulatory schemes to address problems with the loans, the battles are hard fought, with high-paid industry lobbyists beating out popular outrage more often than not.

With record profits posted on Wall Street, it is not surprising that the industry would pay millions to lobbyists to preserve its ability to charge endless high fees. Payday and auto title loans are two-week to one-month loans secured by a post-dated check or an automobile title.

They often carry fees of $20 to $30 per $100 borrowed per two-week or one-month period. As an example, the fees alone on a $4000 fully secured auto title loan exceed $1000 per month, and that’s before any principal can be repaid.

Numerous studies have documented that these easy to get “short-term” loans often lead to a long-term cycle of debt where families struggle to pay the hefty fees month after month without ever reducing the loan principal.

Despite inaction at the state level, the push for reform in Texas continues. In response to thousands of public complaints about abusive payday and auto title lending, the City of Dallas recently took matters into its own hands, passing an ordinance that takes basic steps to address the cycle of debt.

The city is now fighting a lawsuit that alleges, “If the ordinance goes into effect, it will no longer be economically viable for many CABs (Texas-specific designation for certain high-cost payday and auto title lenders) to continue their current lines of business in Dallas.”

The industry is talking out of both sides of its mouth, with constant claims that payday and auto title loans do not cause a debt cycle, yet asserting that basic cycle of debt protections will put it out of business.

The Texas story illustrates both the need for market reform and the need to push for reform at all levels, from individuals to cities to states to national action.

The official launch last week of the Consumer Financial Protection Bureau, which has the authority to address payday and auto title market failures, opens up a new opportunity to push for necessary reforms.

It is time to stand with struggling families across our nation and correct a market failure that has long drained precious financial resources from our families and communities.

Ann Baddour is senior policy analyst for Texas Appleseed, an organization that promotes justice for all Texans by using the volunteer skills of lawyers and other professionals to find practical solutions to broad-based problems.