Guest Voz: Obama Steps Up for Communities of Color in Proposed Budget

LatinaLista — Today, the White House released President Obama’s $3.8 trillion budget request. As soon as it was unveiled, critics attacked the election-year budget for being more about “politics than policy.” Critics are especially angered that Obama doesn’t back down from calling on the wealthy to “pay their fair share” while directing money towards education and rebuilding roads and the nation’s infrastructure. 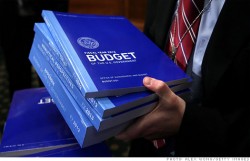 Critics are also incensed that Obama doesn’t touch entitlement programs as aggressively as they expected. Is it a calculated move on Obama’s part to win votes from blacks, Latinos, Asians, Native Americans and the low-income?

Probably, but it doesn’t erase the fact that if entitlement programs were as severely slashed as some GOP congressional representatives want the chaos and turmoil that would be felt within the so-called “99 percent” would be enough to start a class war by itself.

As it stands, the budget works for everyone — the majority who can least afford big cuts to programs that improve the basic quality of their lives and those who do have money, who can better afford tightening the proverbial purse strings.

President Barack Obama’s proposed budget for fiscal year 2013 sets a responsible course for rebuilding the economy so that it works for everyone, not just the privileged few. Our middle class is the engine of economic growth, but is threatened by dwindling public investments, a tax system increasingly rigged to benefit the wealthy, a fraying safety net, and assaults on what should be the bedrock guarantees of Medicare, Medicaid, and Social Security.

The president’s budget protects those guarantees, boosts critical investments, and takes steps toward rebalancing the tax code so that all pay their fair share. And it does this in a fiscally responsible way, charting a path that nurtures the economic recovery while reducing the federal deficit, all without asking the middle class to shoulder a disproportionate share of the burden.

The president’s annual budget is an opportunity for the American people to clearly see what the goals and priorities of the administration are. Judging by the fiscal year 2013 budget released by President Barack Obama today, this administration is focused on growing the middle class and continuing the fragile economic recovery in this tough budget environment. That means there’s a lot for communities of color to cheer about.

People of color have been hit hardest by the current economic recession, both on the employment and housing fronts. And while there have been some recent bright spots in the employment numbers, there is still much work to be done.

Let’s begin with higher education. The president’s FY 2013 budget makes many investments that will directly benefit people of color. For the kids of color who rely on Pell Grants to help get to college, they will be happy to know that President Obama’s budget maintains the recent increases through the 2014-2015 award year. And for them and their parents, the president is proposing to make permanent the American Opportunity Tax Credit, a partially refunded credit that’s worth up to $10,000 per student over four years of college.

At the primary and secondary school level, the president’s budget also invests money into grant programs that will help improve teacher programs at minority-serving institutions. Given the current lack of teacher diversity as noted in a recent Center for American Progress paper, this is a well-timed program.

This budget also delivers in the housing sector. To many Americans, owning a home was a basic part of the American Dream, and much of their personal wealth was tied up in their houses. This is especially true of people of color. And as Pew pointed out last year, the housing crisis helped cause some of the biggest wealth gaps ever seen. President Obama’s plan to help responsible homeowners stay in their homes will help not only individual homeowners but also the communities they live in by slowing down or reversing the neighborhood destabilizations that happen through multiple foreclosures.

And for those for whom the dream of owning a home remains far out of reach, the president put forth $19.1 billion to help extremely low to low-income families with rental assistance to help them live in better neighborhoods of their choosing.

Youth jobs are also a prime focus of the president’s budget, which is good news for people of color. Youth unemployment is a big problem in our country, and it’s an even bigger problem among communities of color. Recognizing that the only way to ensure a bright future is to prepare our youth, the administration is investing in a series of programs to help low-income and at-risk youth connect to the labor market. Proposals include a $12.5 billion Pathways Back to Work Fund and a Workforce Innovation Fund aimed at incentivizing states to either come up with new ideas or replicate proven strategies for delivering better employment results.

The president also calls for extending the payroll tax cut through the end of the year. As CAP pointed out earlier, not extending the payroll tax cut would take money away from the communities who can least afford it. Communities of color suffer from greater economic insecurity than the population at large, evidenced by higher unemployment rates and significant disparities in wealth. Fifteen million African Americans and 21 million Hispanics would see their paychecks maintain their increase from last year if a full extension is passed.

These are just some of the items in the 2013 budget that will continue to charge a path to prosperity. It’s important to point out and recognize the policies that will specifically help communities of color because of the changing demographics of our nation. By 2042 there will be no ethnic or racial majority in the United States. If we want to ensure a healthy and thriving country and economy in the future, we need to focus efforts today to close the racial disparities that currently exist. This budget is a step in the right direction.

Daniella Gibbs Leger is Vice President for New Community Initiatives at the Center for American Progress.