The addition of Congressman Paul Ryan, (R-WI), to the Republican presidential ticket should be alarming to the growing number of Hispanic students enrolling in college. Rep. Ryan’s budget plan would cut more than $15 billion from the Pell Grant program next year — an irresponsible budget cut that would threaten recent gains by Hispanic college students. 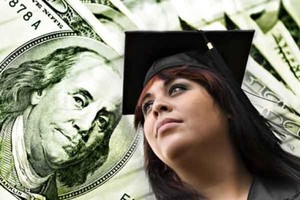 The Pew Hispanic Center also notes that “Hispanics are a growing share of all degree recipients” and “the number of degrees awarded to Hispanic college students has also reached new highs.” Hispanic students earned 140,000 bachelor’s degrees and 112,000 associate’s degrees in 2010, helping them to increase their lifetime earnings and strengthening the U.S. economy in the future.

But Rep. Ryan’s proposed cuts to Pell Grants would drastically reduce financial aid to this new generation of college students, which is one of the many reasons that Rep. Ryan’s budget is so dangerous. Approximately 40 percent of Hispanic college students receive a Pell Grant, which means that cutting the Pell Grant program will clearly limit Hispanic students’ access to higher education—putting a college education further out of reach for millions of Hispanic students.

According to the U.S. Department of Education, 74 percent of Pell Grant recipients have yearly family incomes of $30,000 or less. Moreover, last year Congress lowered the threshold from $30,000 to $23,000 for a student to automatically qualify for an “estimated family contribution” of zero dollars. That change makes it more difficult for low-income students to qualify for the maximum amount of financial aid.

As Chairman of the House Budget Committee, Rep. Ryan has pushed for two policies that would be particularly disastrous for the Pell Grant program. First, The Ryan budget proposes to rescind $13.4 billion next year — and $101 billion over 10 years — that is currently allocated to the Pell Grant program. And second, The Ryan budget proposes to cut funding for nondefense discretionary appropriations by $38 billion next year, which would cut an additional $1.7 billion from the Pell grant program.

The combined cuts of $15.1 billion next year alone would reduce Pell Grant funding by 42 percent, which would be devastating to our nation’s college students, especially Hispanic students who rely on financial aid to pay tuition and college expenses.

Under the current program, the Pell Grant covers approximately 22 percent of a Hispanic student’s college costs, which means that more than half of Hispanic students receiving Pell Grants also take out student loans. Rep. Ryan’s plan to cut Pell Grants would force low-income students and their families to borrow even more money to complete their college education.

Earlier this year, Governor Mitt Romney also advised cash-strapped students to “borrow money if you have to from your parents.” He followed by recounting a story about a friend who borrowed $20,000 from his parents at a low interest rate. Maybe that will be the same advice that Mitt Romney and Paul Ryan offer to Hispanic students who lose their Pell Grants. But the simple reality is that not all Hispanic parents can afford to do that.

The best way to reduce the cost of the Pell Grant program is to rebuild our economy — and make sure that it works for everyone. Boosting family incomes will reduce the need for Pell Grants, and lowering the unemployment rate will reduce the number of adult workers exiting the labor market to return to college.

In the meantime, Hispanic college students continue to make important progress but Rep. Ryan’s budget plan to cut $15 billion from Pell Grants would be a deterrent to that success.

Stephen Steigleder is a Policy Analyst with the Postsecondary Education Program at the Center for American Progress Action Fund.