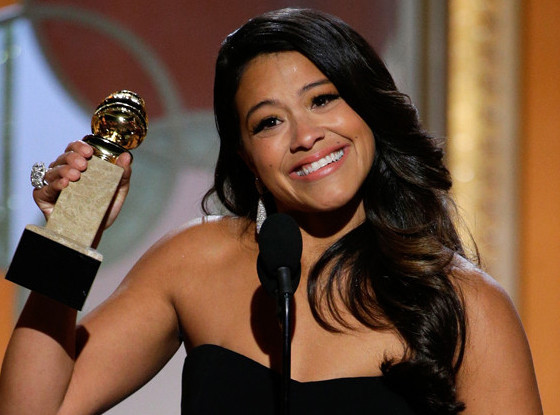 Surrounded by my entire family as we watched the Golden Globe awards felt like a surreal feeling because of its rarity. With the distraction that is cell phones, I would moderately fade out during the commercials. I decided to embrace the moment that I was in and placed my phone aside.

As the award for ‘Best Actress in a Comedy Show’ came on it was the first time I had found out about the critically-acclaimed, Jane The Virgin. Gina Rodriguez, wins the award as my mom and brothers yell in excitement. Completely oblivious to whom she was I asked, “Wait, who is she?” and my mom said to me, “She’s the actress from Filly Brown, she’s Puerto Rican.”

Then it clicked, understand that this was a huge win and why it meant so much to my mom was because it was also a huge win for us. At this point, still processing the new perspective I had of this girl, she took hold of her award already in tears. Her first words, “Thank you God for making me an artist.” Immediately, I was hooked for a strange reason I could not quite describe.

It was an interesting way to begin because it brought about the notion that “God” could possibly well have predestined our lives and she was finalizing that perception. The God topic, is not what I want to write about for it is too “delicate” of a subject for most and complicated to speak of. More so the belief that our spiritual beings have a preset destiny that is instilled upon us for we must search for the reason we are here.

“Thank you to my dad, who told me to dream big and never stop dreaming,” she stated in her award speech. Her dad, a professional boxing referee, who has reffed fights of Manny Pacquiao, among others. The belief from one’s parents/guardians while you’re doing something you’re passionate about has no greater feeling. While her two older sisters chose more “safe” jobs such as a lawyer and an investment banker, her calling was to be an actress.

“Having [my dad] accept what I did, that was my big break. It’s so important to me to make my father and mother proud. And I want to do it with integrity and respect.” This is a noble thing to say and because of her recent success she has a lot more leeway in which parts she selects.

She has turned down parts that involved her being a maid, characters that misrepresent and/or feed the stereotypes already portrayed by the media about Latinos. She wants to enact characters that bring about role model qualities to those that are looking up to her as such.

“I didn’t see color as a young girl; I used to think that we didn’t even exist, and then to see Rita [Moreno] do it [perform], I just realized we needed to make a stronger impact. That set off my course. And I used to say that I was going to be the Latino Meryl Streep one day.” Although, those are huge shoes to fill, I do not see any limits for her. She’s truly embarking on a stunning career and she has yet to hit her prime.

She’s flawed, nothing’s perfect, only fantasies. At 19, she was diagnosed with thyroid disease which caused many issues with her own body and weight. “[My weight] was something I never thought about prior to getting thyroid disease. For a while, I would look at myself and what was on screen and in magazines and say, ‘This is never going to be possible because there’s no way I can attain that beauty size.’ I had to look at myself and overcome the idea that I was limited by what God gave me.” That statement is often said in theory but the genuine manner in which she says it, she can very well be an inspiration to young girls that are overexposed to photoshopped women in mass media.

Back to the pivotal line of her Golden Globe acceptance speech…

“This award is so much bigger than myself. It represents a culture that wants to see themselves as heroes.”

Emotions raced through me in not only disbelief of what I had just heard but what I felt in that moment, in front of millions viewing as well, Gina just changed the world!

It may be a bit dramatic, but she ultimately brought attention to the upbringing that is occurring. The cultural landscape in America is shifting because of the increase of Latinos. The moment she said that, it certainly changed my world.

“First and foremost, the nomination alone was a win for me because it allowed our culture, it allowed Latinos to see themselves in a beautiful light,” Rodriguez said. “For me, the win meant everything.” A beautiful light, shone upon a culture filled with darkness for quite some time.

This peephole of light shines onto, not only Latinos, but to all minorities. She has stated herself that Jane The Virgin, is more than just a story to relate to that of the Latino community but to all.

“We are dealing with a society that is so diverse, so beautiful and so human,” Rodriguez said. “We need to remember that we have the same stories, and see it as such.”

It’s true, we are all able to relate on many of the same circumstances, oppressions, and injustice. Yet, formulaically the system creates barriers within communities that most cannot overlook.

Why it meant so much to me?

I am not precisely sure but it impacted me on such a personal level, it’s almost as if she took the words out of my mouth. Now, having watched all the episodes and seeing what her show is about, how it’s structured, and the Latino influence it has, it made the win that much more significant for me.

It was like everything I have ever wanted to do, in one quote/speech. What I set out to do is so much bigger than myself. I am bigger than my own self. I want to do what she has done. I want to represent. I want to be on a platform one day, to be heard. To impact and create memorable moments like that for the culture. To have such passionate words spoken from the heart be heard.

This is what I aspire to become, maybe not as an actor but in that overall realm, where I can affect the most people possible. Preexisting notions and conditions within us are the only things that will limit us from becoming our higher selves. No matter how much success one obtains they must remember the roots from whence they came.

To inspire those who look up to you, to act accordingly to your own morals/values, and understand that it is always so much more than yourself. You never know who you might be influencing, who you might be affecting, who truly believes in you, who looks up to you, and that’s more than enough reason to keep living with passion about your art.

We are all artists, it is simply a matter of pouring one’s heart and love into it. Gina’s dad would tell her to state each day, ‘Today’s a great day, you can and you will,’ she finally got to say she did do it and that was magical.

I am Mexican, an aspiring entrepreneur, who has parents that sacrificed everything to give me the opportunities they never deemed possible for themselves. I won’t let that go to waste. Gina’s win inspired me to view things differently, it’s about the community, it’s about altering the culture, and it’s about the unity that is upon us.

Thank you Gina, you are an inspiration and you just altered the mind state of an individual that will one day be up there manifesting change. A Creative Dreamer developing and constituting goals into a reality — till the day I can say, “Mom and Dad, I can and I did. Thank you.”

Erik de la Cruz is the CEO of Creative-ive.

Previous Post Crowdfunder: Using music to help elderly with dementia/Alzheimer's reconnect with their past
Next PostMuralists of San Francisco's Precita Eyes add color to psychiatric ward