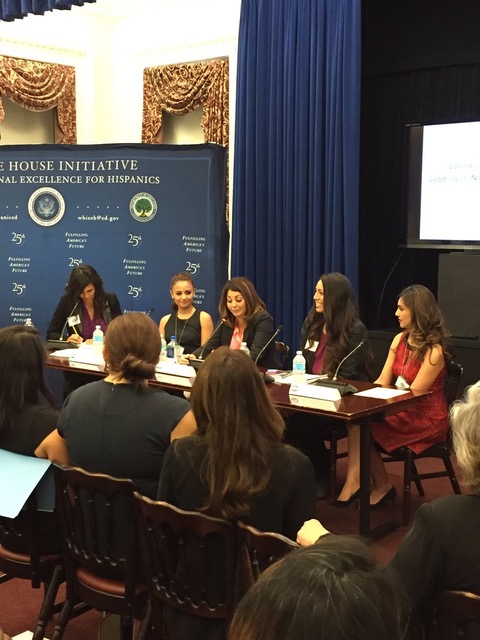 Cristela Alonzo, as a girl, dreamed about meeting the Backstreet Boys. She dreamed that she would be the best maid ever. She would clean so good that the singers would notice her. It never occurred to Cristela that she would become the first-ever Latina to create, produce, pitch, write and star on her own show. It never occurred to that young girl that SHE would be the star of her own story.

Cristela’s story is fortunately not unique. On Friday, October 21, approximately 100 Latinas from all over the country gathered at the “Fullfilling America’s Future, Latinas in the U.S. Summit” at the White House and shared their stories but most importantly, what they are doing to improve the education, economic development and social mobility of women from Latin-American descent.

In that room, all stories, our stories, were not unique and were amplified.

Cristela served as Mistress of Ceremonies; but that is an understatement. Cristela kept us grounded — firm in our convictions that YES we are at the White House talking about US. Cristela brought us home and hugged us tight. She made us cry and made us laugh. Cristela became a sister. Una hermana. The family that perhaps we never knew we had.

“I am the 26th Latina to ever get a PhD in business in this country,” said Dr. Cinthia Satornino. “We need more of you,” she added; and then proceeded to make a business case to why it makes sense for Latinas to not only pursue higher degrees but also be school administrators.

“It is an economic imperative,” she finished.

Diana Trujillo, a lead engineer at NASA in charge of the Mars Curiosity Rover reminded us that even as we literally break the boundaries of what is possible in earth and space, we still sometimes worry about our accent and being understood. She also reminded us that when we are called “terca” (stubborn), it is because sometimes we are the only ones that know what we can and want to do.

“They thought I was the receptionist,” shared Silvia Olivas, co-producer and head writer for Elena of Avalon, the first Latina-looking princess for Disney.

When Silvia writes, she often thinks about how all the unheard voices of other Hispanic writers would  be portraying their experiences. Elena is a princess, but also a shero on a journey to become a better ruler, negotiate treaties and be a good sister, granddaughter and friend. There is a leadership lesson in every episode.

“It is healing to BE who you did not have, to provide what you didn’t get” became a powerful statement that encompassed so much truth and love in the room that tears of emotion started flowing way before Denise Frohman recited her poem “ACCENTS”.

Rosi Ríos, 43rd U.S. Treasurer shared how she became a feminist “by accident” by reviewing thousands of renderings used to print currency, posters, the very history we touch every day with our fingers and noticing there was not a single real woman represented. Her quest for inclusivity and diversity is one that has only started but has already given us the first woman on the $20 bill.

John B. King, U.S. Secretary of Education emotionally stated that it was his mother, a brave and committed Puerto Rican who instilled in him his love for service and his community. He shared that one of his greatest regrets was not being able to learn Spanish from his mother, since she died when he was in the fourth grade. He encouraged us to take responsibility for advocacy and activism in our communities.

Borrowing a quote from Justice Sonia Sotomayor, King said, “The will to aspire” is what education is really about.

Questions about stereotypes, about representation (hello Afro-Latinas! Hello Queer-Latinas!) were discussed. The paradox of having families that risked everything to give us the best they could yet try to retain us to do the same simply because they love us too much and do not want to see us suffer was hanging in the air.

Jacqueline Cortez-Wang thanked her mother, for helping her become who she is. Her mother was watching online.

Other Latinas present were Cecilia Muñoz, the highest ranking Latina in the White House, assistant to President Barack Obama and director of the Domestic Policy Council; Beatriz Acevedo, founder of MiTu; Vanessa Casillas, a bricklayer and journeyman; Tina Tchen, Chief of Staff for Michelle Obama; Dr. Sobeyda Gomez-Chou, who has a PhD in Cancer Biology but left to teach high school in Oakland; Dulce Ramirez, a White House intern who wrote a poignant letter to her young-self.

So many wonderful Latinas brought together. The catalyzer of it all was Alejandra Ceja, Executive Director for the White House Initiative on Educational Excellence for Hispanics and her team: The incredible Michelle Moreno, Jacqueline Cortez-Wang, deputy director for the initiative and Ginnette Magana, Hispanic Outreach Liaison and so many others.

“Pa’lante!” roared Carlos Gomez as he closed the summit with a poem about a young student dreaming of entering the White House as the first Latina President.

“Celebrate our diversity, especially in our experiences, we all have stories, some are different stories and as long as they are true, they are powerful; and they need to be heard…. And ladies, we are still at the White House!” Cristela, once again, reminded us.

I am incredibly grateful for the experience, for the emotion, for the stories, for the motivation…. Dr. Alma Martinez from University of LaVerne told me before I left: “You need to find the right people, a good team to continue your work. Keep trying, just don’t give up”  and that is exactly what I will do.

Gilda Pedraza is the founder and publisher of Latino Connection