One of Chicago’s most prolific artists, Marcos Raya, highlighted at city museum 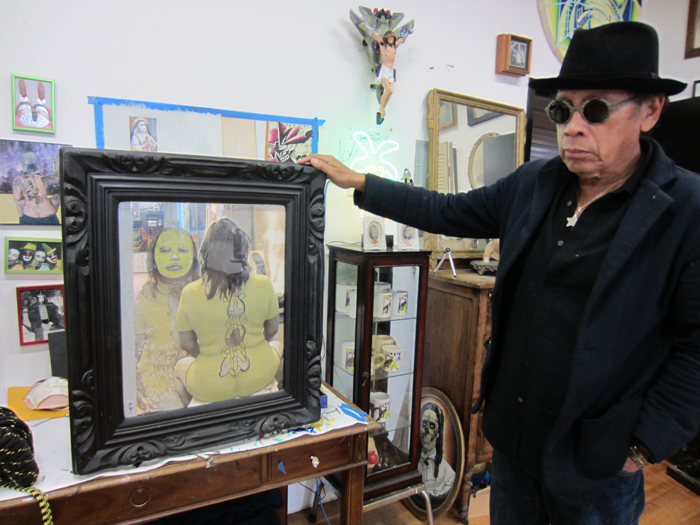 Marcos Raya, one of the city’s most prolific artists, will be featured as part of the Museum of Contemporary Art Chicago’s upcoming exhibit “Surrealism: The Conjured Life,” which opens Nov. 21 and runs through June 5, 2016. The exhibit will showcase over 100 pieces of work that demonstrate the deep currents that surrealism sent through the international art world – and especially through Chicago – since its emergence in the first half of the 20th century. Along with work by Raya, classical surreal work by artists like Remedios Varo, Balthus andLeonora Carrington will be interspersed with international contemporary figures like Jeff Koons, Cindy Sherman and Ann Wilson.

Raya arrived in Chicago from Irapuato, Guanajuato in the early 60s, fervent in his desire to create art despite the harsh reality of the neighborhood where his family settled. “It was really bad in that area, ugly, full of gangs and drugs, but it’s where a growing community of Mexicans lived. Eventually, we would all make our way over to Pilsen,” he explained about his time lived in the Little Italy neighborhood.

During high school, Raya was introduced to a whole new world of art and was eventually given the opportunity to explore his talents at the prestigious Windsor Mountain School in Massachusetts on a full scholarship from the University of Illinois. He soon became curious about art in general and began traveling to other cities, including time spent back in Mexico City during the turbulent student uprisings of the late 60s, pivotal moments that would influence his work. Exuding the admiration he first felt as a young boy when he met Mexican muralist Jose Chavez Morado, as well as a life-changing visit to the Museum of Modern Art in New York during their International Surrealism Exhibit, Raya became and continues to be a pioneer of the muralist movement in Chicago.

Throughout his lifetime, his struggles with…

art, Chicago, contemporary art, featured, museum
Previous Post ToyQuest first look
Next PostCrowdfunder: Telling the story of a clinic of the people, for the people and a seed for change in communities across the USA

ToyQuest first look
Comment
Crowdfunder: Telling the story of a clinic of the people, for the people and a seed for change in communities across the USA