A Voice for Migrant Students 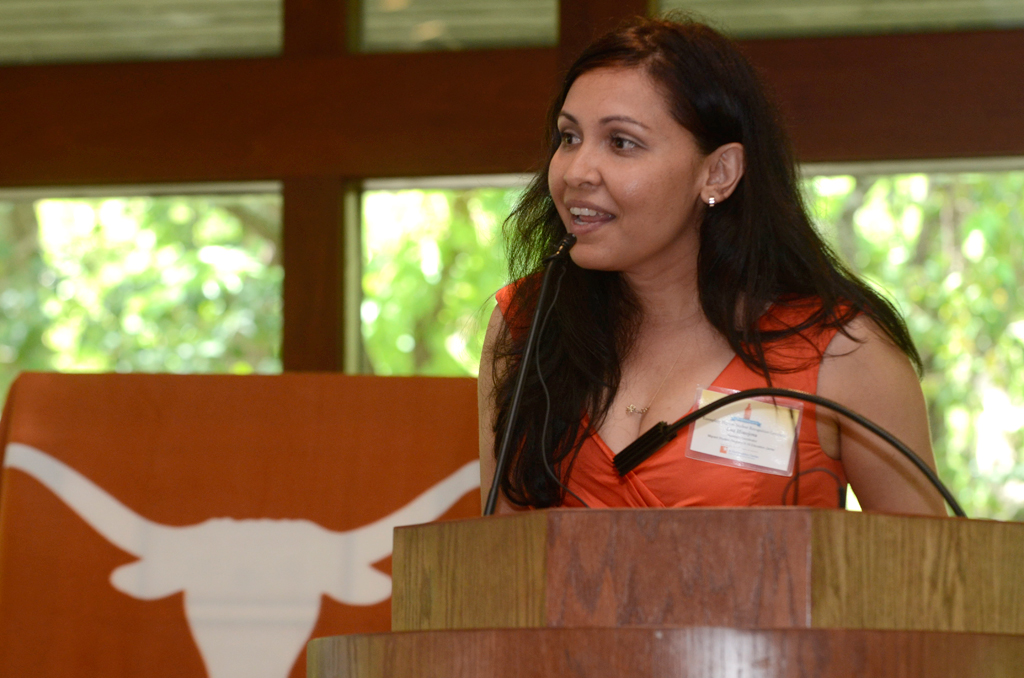 It was a familiar conversation, as routine as her family’s yearly drive from Texas to California and back again. Each October, Luz Hinojosa sat quietly by her parents as her teachers tried to stop her from taking their class. Recently arrived from California, Hinojosa wasn’t just starting school six weeks late; she wanted to take courses that challenged even the students who’d been there since August. It’d be better for everyone if she didn’t enroll in AP Biology, they’d say. “There’s no way she’ll catch up.”

“Just give her a chance,” her father would plead, until her teachers doubtfully relented, each issuing the same warning: “She’ll have to work hard.”

Hinojosa, MPAff ’10, was used to working hard. At 14, she’d joined her parents cleaning cotton and picking grapes from April to October in California’s San Joaquin Valley. Those 10-hour days in 110-degree heat translated to school discipline in Mission, Texas. She came early, stayed late, and skipped lunch for tutoring.

Hinojosa wasn’t shy, but she wanted to pass unnoticed. “A lot of times you feel alone, and you think, ‘I don’t want to be a burden to this teacher, to this school,’” she says. “I didn’t want any attention drawn to the fact that, yeah— my summers, I spent them working.”

Soon, her skeptics came around: “She’s quiet, but her grades are there,” teachers would say.

Now Hinojosa works on behalf of 51,000 migrant students living in Texas. UT’s Migrant Student Graduation Enhancement Program, where Hinojosa is the coordinator, helps high school students keep up through free distance- learning courses, allowing them to earn high school credit even as they work in other states. It’s the only program of its kind in the country, serving some 3,000 students each year. Many go on to become the first high school and college graduates in their families.

Hinojosa is the second coordinator in the program’s 27- year history, and is the first who was once a migrant student herself. Sitting in her cozy corner office, she opens a photo on her computer: Her teenage self leans against a red truck in faded jeans, a sweatshirt beneath a plaid button-up, sunglasses, and a handkerchief over her ponytail. Cotton rows stretch to either side, but Hinojosa’s summer nemesis was the grape. She shudders thinking of that plump green supermarket staple, smacking a hand to her forehead. “What a pain in the butt.”

In stores, she says, “You don’t think, ’How did those grapes get in those nice little bags?’ Well, there’s a person putting them there. There’s a student, maybe.”

There’s a student, likely living below the poverty line, whose education credits don’t transfer easily between states. Some work strictly in summer; some return to school alone. Twenty-two percent drop out, according to a 2013 UT report. Others stay for a full harvesting season, usually April to October.

Hinojosa recruits people like Garza, so that her team is mostly staffed by former migrant students. They show students and their parents that college is possible. “I think it helps to see someone who reminds them of their daughter or son. It creates a trust that might not be so easy if the face or the story is less familiar.”

Those stories are also changing in important ways, Hinojosa says. “I wanted to be as invisible as possible. The current students that I see are more empowered. There’s a sense of pride in what they do and what their parents do.”

Carlissa Garcia, BS ’13, didn’t feel empowered when she began shucking corn. “I was just so angry,” she recalls. “I was like, ‘I’m 13; it’s summer!’ I thought I had the worst parents alive. I didn’t understand they needed the help.”

Then, “I realized I wasn’t the only 13-year-old there. At the end of the summer, I thanked my parents. I told them it had opened my eyes. I appreciate everything so much more.”

Still, “it seemed to be the longest summer of my life.”

Karen Corral thought she’d be camping her first summer; divorce had toppled her mother’s finances and she didn’t want her children to worry. When it became clear their family camp-out also involved work, Corral told her little brother their mother wanted to buy him toys, and to teach him how greens get to Wal-Mart. Now, “he thinks Mom’s a superhero.”

Last summer, Corral brought a UT Migrant Student Program course with her to the fields, studying a printout of online course materials each evening. In August, she will attend college. She’ll talk openly about her three summers slicing green onions for $8.25 an hour. “When people ask, ‘Oh, you do that?’ I say, ‘Yes, I do that.’ I help out—not only my family, but my community. That’s something to be proud of.”

This article originally appeared in the Alcalde, the official publication of the Texas Exes.