Latino youth have higher rates of smoking than Hispanic adults

LatinaLista — January 1 is more than just the first day of a new year. To a lot of people, it’s the start of either recycling old resolutions or making new ones. The two most popular resolutions have historically been losing weight and quitting smoking.

In this day and age when smokers are treated like social outcasts at places like restaurants, movies and even their own offices, you would think that smoking isn’t such a big deal anymore. 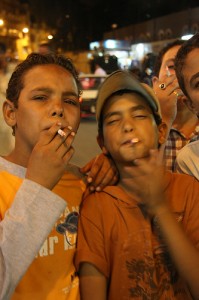 It is — and especially among Latino youth.

The Center for Disease Control and Prevention reports that the most recent data (2009) showed that 19.2 percent of Latino teens smoked, from the overall percentage rate of teens who smoked in high school. That’s way more than either African American students, 7.4 percent; or Asian American students, 9.7 percent; though a little less than white students at 19.4 percent.

The CDC reports that only 14.5 percent of Latino adults smoked in 2009.

However, the story doesn’t stop there.

The National Cancer Institute breaks the smokers down even farther.

Immigrant generation may affect cigarette smoking––nearly 17 percent of Hispanics who were born in the United States smoke, whereas only about 11 percent of Hispanic immigrants are smokers. Other patterns of smoking show that Hispanic subgroups have different smoking rates.

So why are so many Latino youth taking up the bad habit?

There are a variety of reasons that are both predictable and unsurprising:

Faced with these kinds of challenges, it’s not surprising that these young smokers ignore the possibility of a future with lung cancer, emphysema, heart disease or a whole host of chronic illnesses.

Luckily, there are some organizations not willing to give up on these teen smokers, who, in turn, grow up to be adult smokers.

With bright graphics and oversized images, the site is high on eye-appeal. It’s only one element of the strategy to attract teens to actually use the site. The other element is incorporating technology. Free sign-up is provided for SmokefreeTXT, a free mobile service, targeting teens across the United States with 24/7 encouragement, advice, and tips to help them stop smoking for good.

If that doesn’t work, maybe they can create something where these young beautiful teens upload their pictures and they can see for themselves what they’ll look like down the road if they keep smoking — yellow, stained teeth, deep wrinkles around their mouths and a cataract for good measure.

If that doesn’t scare them, nothing will.