LatinaLista — If the 2011 National Survey of Latinos (NSL) proves anything, it proves that Latino voters aren’t swayed totally by emotion when it comes to supporting a presidential candidate and/or his/her policies. Latino voters can take a step back, look at the bigger picture and weigh the pros and cons, no matter how frustrating is the final decision. 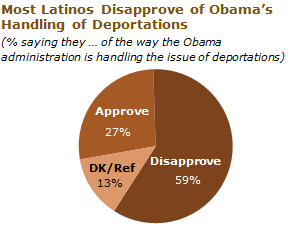 The latest national survey issued by the Pew Hispanic Center to 1,220 Latinos, ages 18 and up,from November 9 through December 7, 2011, reveals that while a majority of Latinos don’t like the Obama administration’s deportation policies, most would probably vote for him in 2012.

It’s because Latino voters have a complex relationship with Republicans. On the one hand, more Latinos self-identify as conservative but are turned off by the negative GOP rhetoric targeting undocumented immigrants. If anything, the survey shows just how big an opportunity the GOP is missing out on when it comes to Latino voters. By adopting a strategy that purposely alienates a conservative segment who are compassionate to the plight of their undocumented hermanos and hermanas, Republicans are forcing Latinos to choose. Everybody knows familia comes first.

Looking at the survey more deeply, it’s immediate clear that Latino voters are not in favor of open borders, as some suggest. In fact, more Latinos believe that a combination of both enforcement and legalization is the route to take when dealing with the issue of illegal immigration.

The bottom line is the 2012 election doesn’t excite Latino voters like it did in 2008. The old saying, “stuck between a rock and a hard place,” takes on new meaning for a constituency that wants to remain hopeful but has been hit with such a strong dose of disillusionment that even if their candidate of choice wins the election, no one will still feel like celebrating.

According to the survey findings: