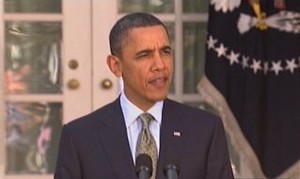 THE PRESIDENT: Good afternoon. Earlier today, the Supreme Court upheld the constitutionality of the Affordable Care Act — the name of the health care reform we passed two years ago. In doing so, they’ve reaffirmed a fundamental principle that here in America — in the wealthiest nation on Earth – no illness or accident should lead to any family’s financial ruin.

I know there will be a lot of discussion today about the politics of all this, about who won and who lost. That’s how these things tend to be viewed here in Washington. But that discussion completely misses the point. Whatever the politics, today’s decision was a victory for people all over this country whose lives will be more secure because of this law and the Supreme Court’s decision to uphold it.

And because this law has a direct impact on so many Americans, I want to take this opportunity to talk about exactly what it means for you.

First, if you’re one of the more than 250 million Americans who already have health insurance, you will keep your health insurance — this law will only make it more secure and more affordable. Insurance companies can no longer impose lifetime limits on the amount of care you receive. They can no longer discriminate against children with preexisting conditions. They can no longer drop your coverage if you get sick. They can no longer jack up your premiums without reason. They are required to provide free preventive care like check-ups and mammograms — a provision that’s already helped 54 million Americans with private insurance. And by this August, nearly 13 million of you will receive a rebate from your insurance company because it spent too much on things like administrative costs and CEO bonuses, and not enough on your health care.

There’s more. Because of the Affordable Care Act, young adults under the age of 26 are able to stay on their parent’s health care plans — a provision that’s already helped 6 million young Americans. And because of the Affordable Care Act, seniors receive a discount on their prescription drugs — a discount that’s already saved more than 5 million seniors on Medicare about $600 each.

All of this is happening because of the Affordable Care Act. These provisions provide common-sense protections for middle class families, and they enjoy broad popular support. And thanks to today’s decision, all of these benefits and protections will continue for Americans who already have health insurance.

Now, if you’re one of the 30 million Americans who don’t yet have health insurance, starting in 2014 this law will offer you an array of quality, affordable, private health insurance plans to choose from. Each state will take the lead in designing their own menu of options, and if states can come up with even better ways of covering more people at the same quality and cost, this law allows them to do that, too. And I’ve asked Congress to help speed up that process, and give states this flexibility in year one.

Once states set up these health insurance marketplaces, known as exchanges, insurance companies will no longer be able to discriminate against any American with a preexisting health condition. They won’t be able to charge you more just because you’re a woman. They won’t be able to bill you into bankruptcy. If you’re sick, you’ll finally have the same chance to get quality, affordable health care as everyone else. And if you can’t afford the premiums, you’ll receive a credit that helps pay for it.

Today, the Supreme Court also upheld the principle that people who can afford health insurance should take the responsibility to buy health insurance. This is important for two reasons.

First, when uninsured people who can afford coverage get sick, and show up at the emergency room for care, the rest of us end up paying for their care in the form of higher premiums.

And second, if you ask insurance companies to cover people with preexisting conditions, but don’t require people who can afford it to buy their own insurance, some folks might wait until they’re sick to buy the care they need — which would also drive up everybody else’s premiums.

That’s why, even though I knew it wouldn’t be politically popular, and resisted the idea when I ran for this office, we ultimately included a provision in the Affordable Care Act that people who can afford to buy health insurance should take the responsibility to do so. In fact, this idea has enjoyed support from members of both parties, including the current Republican nominee for President.

Still, I know the debate over this law has been divisive. I respect the very real concerns that millions of Americans have shared. And I know a lot of coverage through this health care debate has focused on what it means politically.

There’s a framed letter that hangs in my office right now. It was sent to me during the health care debate by a woman named Natoma Canfield. For years and years, Natoma did everything right. She bought health insurance. She paid her premiums on time. But 18 years ago, Natoma was diagnosed with cancer. And even though she’d been cancer-free for more than a decade, her insurance company kept jacking up her rates, year after year. And despite her desire to keep her coverage — despite her fears that she would get sick again — she had to surrender her health insurance, and was forced to hang her fortunes on chance.

I carried Natoma’s story with me every day of the fight to pass this law. It reminded me of all the Americans, all across the country, who have had to worry not only about getting sick, but about the cost of getting well.

Natoma is well today. And because of this law, there are other Americans — other sons and daughters, brothers and sisters, fathers and mothers — who will not have to hang their fortunes on chance. These are the Americans for whom we passed this law.

The highest Court in the land has now spoken. We will continue to implement this law. And we’ll work together to improve on it where we can. But what we won’t do — what the country can’t afford to do — is refight the political battles of two years ago, or go back to the way things were.

With today’s announcement, it’s time for us to move forward — to implement and, where necessary, improve on this law. And now is the time to keep our focus on the most urgent challenge of our time: putting people back to work, paying down our debt, and building an economy where people can have confidence that if they work hard, they can get ahead.