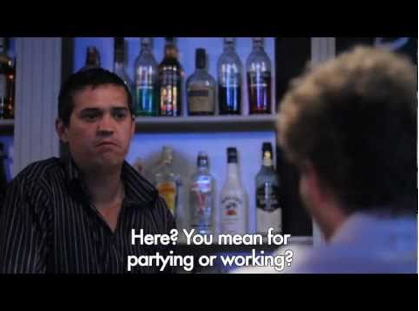 LatinaLista — What happens when an Anglo-American young man finds himself in a small rural Andalucí­an village in Spain to teach English to the locals? We get a touchingly funny web series described as a blend of documentary and fiction titled Pueblo.

Pueblo was filmed from 2010-2011 and created as a bilingual project by friends Eve Richer and Ben Raznick while working as English teachers in La Puerta de Segura, Spain. The duo worked with local teachers and townspeople and even the soundtrack is by Spanish musicians. What makes the project really interesting is that neither had any experience in filmmaking or had any money to create the series.

Yet a charming story was the result of such risk-taking.

Ben Raznick plays fish-out-of-water Ben, an American English teacher who arrives in Spain to teach English in the schools and soon develops a relationship with a local beauty named Erika Martinez who happens to be played by… a mannequin head. The fact that she’s a mannequin head is never acknowledged throughout the series, which only adds to its quirky charm and unique storytelling.

The eight-episode web series is said to be a love letter to the Spanish town and its inhabitants, giving everyone a rare glimpse into the lives and landscapes of a world most people will never get to experience.

The series’ creators developed a web site that not only highlights the film but gives real-world advice on how to apply for the proper paperwork and visa to visit and work in Spain, behind-the-scenes filming of the web series and the full story of how such an unlikely story found its way on the cyberscreen.