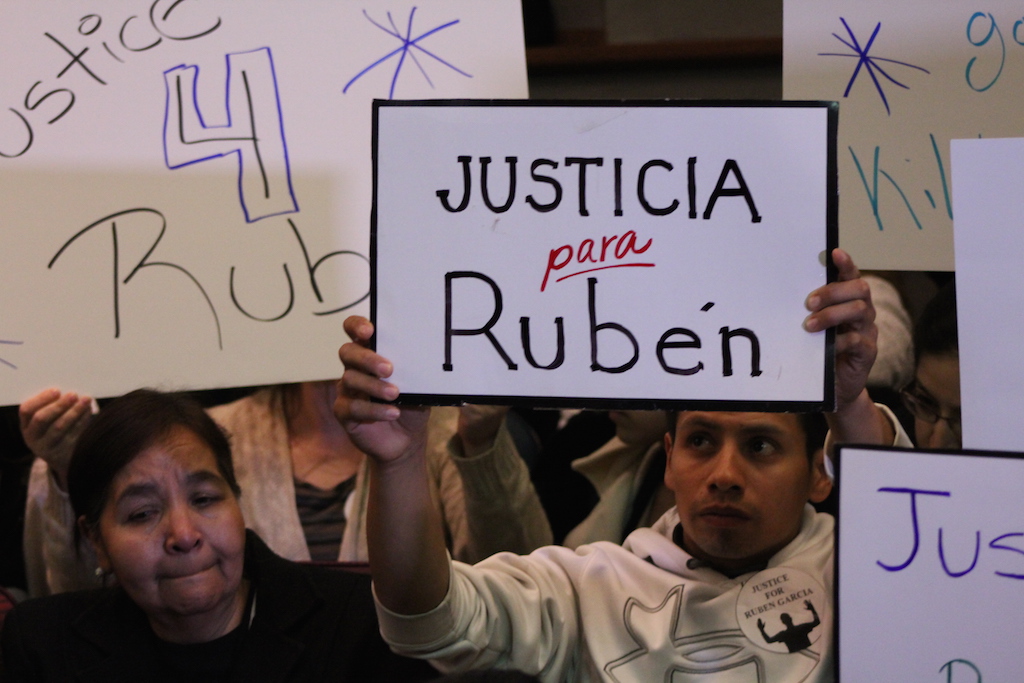 GRAPEVINE, TX — The Grapevine City Council conference room filled with shouts of “No justice! No peace!” Tuesday night as more than 100 people showed up to protest the officer-involved killing of Ruben Garcia Villalpando.

Martha Romero, Villalpando’s wife, sat quietly in the front row of the conference room with her four children. Villalpando’s parents who were visiting from the Mexican state of Durango sat behind her wearing “Justice for Ruben” stickers.

Signs around the room read with “Are you going to kill me?” which Villalpando’s family said were his final words.

The activist reaction comes after the unarmed Villalpando was shot and killed by Grapevine police officer Robert Clark on the night of Feb 20.

After clearing its agenda, the council left the remainder of the meeting to those who had signed up to speak.

“Right now it’s my family suffering, but what about tomorrow? What about the families of tomorrow?” said Fernando Romero, Villalpando’s brother-in-law. “We want this to stop and we want justice. We want what is right. We want everything to be clear. I’m asking you to make it right.”

Domingo Garcia, the family’s attorney, asked the council for transparency during their own review of the incident out of respect for the family.

“In this case, we have not only verbal abuse of Ruben Garcia but also the shooting of an unarmed individual with his hands above his head,” Garcia said. “Whatever the circumstances, Martha [Romero] and her four children will never see their father again. He won’t be there when they graduate, when they get married, on Christmas, [or] on Father’s Day.”

The incident occurred when Clark was called to investigate what turned out to be a false alarm in southwest Grapevine, which sits about 25 miles northwest of Dallas. Clark noticed Garcia’s Toyota pickup on the property and began pursuing the vehicle.

Villalpando’s wife told media that her husband may have attempted to flee out of fear of being deported.

Police said Garcia traveled south for about two and a half miles on a service road. After the brief pursuit, Garcia pulled over and exited the vehicle with his hands in the air.

Clark instructed Garcia to stand still, but Garcia continued moving slowly toward Clark with his hands in the air. Before Clark shot Garcia twice in the chest, Garcia asked “Are you going to kill me?”

At the meeting, Villalpando’s family received support from numerous strangers at the podium.

Mallory Rouse of Dallas told the council members that she understands how difficult it is to raise three children.

“This woman here no longer has support. She is the sole person responsible for tucking all four children in at night by herself. She no longer has the help of her husband,” Rouse said. “These kids no longer have their father, and if that doesn’t strike y’all…to do something – to look into something, then I really question y’all’s capability in the chairs that y’all sit in.”

Fernando Romero said after the meeting that he did not expect to see so much support from strangers, but it made him glad to see people committed to demanding action from the Grapevine City council.

“I want them to know that it is still possible for us to trust them, but they have to make an effort to gain back our trust as citizens,” Romero said.